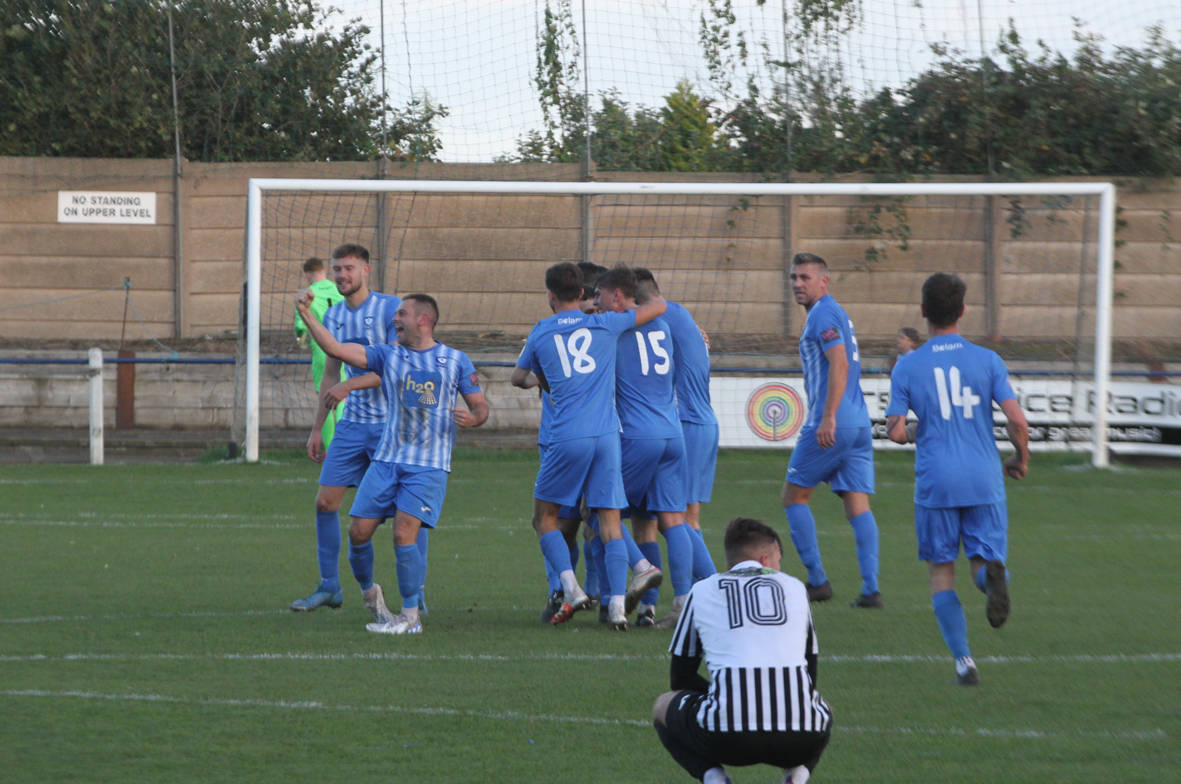 A superb goal late in the game from 17 year old Bailey Geliher sealed victory for Whitley in a hard fought contest against Whickham.

The visitors had the majority of possession throughout the game but whereas Whitley took two of the chances that came their way, Whickham were unable to break through the Bay’s well organised defence until the 86th minute. The goal brought them level after Whitley had taken the lead on the stroke of half time but parity lasted just 60 seconds with Geliher’s strike proving decisive.

The game saw a return to Hillheads for former Bay joint manager Tony Fawcett, now in charge at Whickham, and his side started brightly, enjoying most of the early play and pushing Whitley back in their own half. With ten minutes played, Dan Lister parried a powerful shot across goal from Joey Smith and the ball was cleared to safety.

Whitley suffered a blow when Stephen Turnbull picked up an injury after a collision with Whickham captain Dale Burrell and despite treatment, was unable to continue, with Lewis Orrell taking his place.

The first threat to the Whickham goal came after 25 minutes when a cross from the right was nodded back across goal by Scott Lowery and Adam Hutchinson headed just over the bar.

Nine minutes later the visitors threatened again following a good save by Lister when the ball was scrambled away from the six yard box. Play immediately switched to the other end where Geliher had a shot blocked.

A bizarre incident occurred a shortly afterwards when Hutchinson won the ball in a challenge with Jamie Dunn, with the former Bay man making what looked a theatrical dive. The referee, after lengthy discussions, showed Elliott Day a yellow card and awarded the visitors a free kick on the edge of the Whitley box. Five minutes later Whickham were given another free kick in a similar position after an innocuous looking challenge which frustrated players and fans alike.

In stoppage time, Whitley won a corner on the right, and when the ball was played across goal, it was headed on by Lowery and Day cleverly back heeled it over a defender and from just wide of the back post, Cameron Brewis slotted the ball home from a narrow angle.

The goal came against the run of play but it gave Whitley a crucial half time lead.

Within seconds of the restart, Scott Robson nearly levelled the score after breaking away upfield but Lister made an important save.

As in the first half it was the away side who looked the likelier to score but they were meeting stern resistance from the Bay midfield and defence, with Ben Richardson prominent.

Whitley suffered a second injury ten minutes into the half when not for the first time, Luke Porritt took a knock on the head and was replaced by Josh Gilchrist.

On the hour, Robson almost broke clear on goal but was denied by a timely tackle from Hutchinson. Another Whickham chance came and went when Moody broke through on the left but Lister made a great block. Smith was thwarted by Lister as the game entered the final 15 minutes, with good play by Whickham denying Whitley possession as the visitors searched for a way through.

With time running out, Whickham finally got the break that their play deserved. Capitalising when Whitley conceded possession inside their own half, they raced away upfield and this time Robson took the ball round Lister on the left of the box before driving it high into the net.

The Bay fans were suddenly subdued, but not the team. Almost immediately, attacking down the middle, Harvey Neary played the ball through to Geliher inside the penalty area. Surrounded by opponents, he took the ball away from goal, circled round across the edge of the 18 yard box past several defenders, then choosing his moment, unleashed a tremendous 20 yard shot that flew into the top corner of the net leaving keeper Nathan Harker helpless.

Without a doubt it was the best goal seen at Hillheads for a considerable time and put Whitley back in front.

Understandably it left the Whickham players deflated and in stoppage time, substitute Jackson Ward almost added a third goal but was denied by a goal line clearance.

The crowd of almost 400 fans had been treated to as dramatic a climax as they could have imagined and while Whitley were able to celebrate a victory which keeps them in second place, Whickham deserve credit for an impressive display and can count themselves unfortunate to have left empty handed.

To come away with three points when not at their best is certainly a good sign for Whitley, whose resilience and never say die attitude once again brought reward.