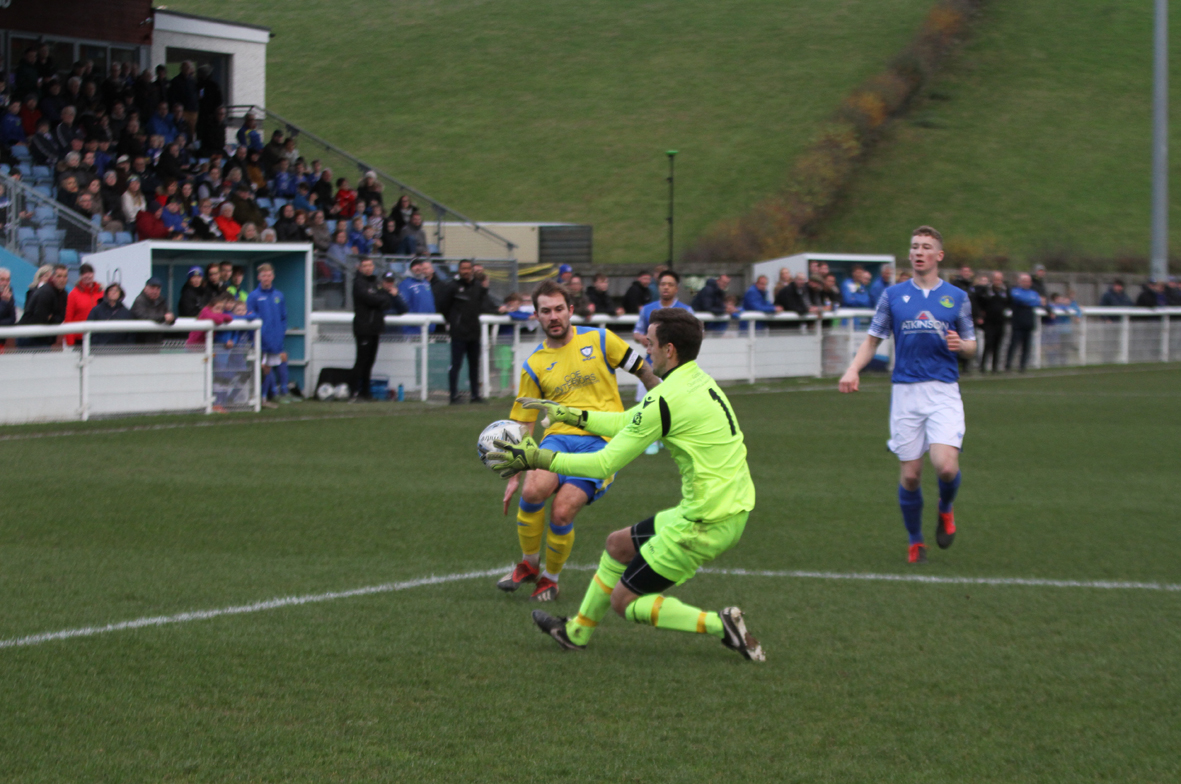 Whitley returned from Penrith with a hard earned victory after an excellent second half performance. The Cumbrians were much the better side in the opening period but after the break, Mitchell Ramsay put Whitley ahead with a well taken finish. Eight minutes later he turned from hero to villain when he was sent off for a moment of indiscipline. Despite being down to ten men, an outstanding goal from Adam Shanks ensured a second successive league victory.

The opening stages of the game were dominated by Penrith with Whitley struggling to break out of their own half. On the quarter hour, Max Brown fired wide for the hosts and four minutes later the same player clipped the top of the bar after good approach work had given him a clear sight of goal. Passes from both sides were going astray with play becoming rather scrappy. Gradually Whitley worked their way into the game and twice in the space of four minutes, crosses from the left by Ramsay found Lewis Orrell whose attempts on goal were blocked.

Brown was the main threat for the hosts and when Steede crossed from the left, his close range finish went wide of the near post. At the other end, Scott Lowery headed over the bar from Orrell’s free kick then when the ball was played in from the right, Morien’s looping header was saved just under the bar.

The game remained goal less at half time but Whitley looked a different side on the restart, pressing forward to much greater effect. A cross from the left by Ramsay was flicked on by Morien in front of goal but the ball was cleared from danger. Just four minutes into the half, Whitley broke the deadlock when Morien played a great ball through the Penrith defence. Ramsay timed his run to perfection, breaking clear on goal before slotting the ball past Aaron Taylor. Battling back, Penrith won a free kick about 25 yards out and Armstrong’s shot was pushed wide by Lister. Another free kick for the home side resulted in a shot crashing off the post and away from danger. When Whitley responded, Ramsay sent another ball in from the left and Moynan’s defensive header flew narrowly wide of the near post.

Ramsay had been proving very influential since the break but after a challenge on Taylor, he chased the keeper and a confrontation between the two ended with referee Glen Hart showing Ramsay a red card.

Down to ten men, Whitley looked to be really up against it and five minutes later only a great fingertip save from Dan Lister kept them in front, as Brown burst clear on goal. Back at the other end, Orrell went close to doubling Whitley’s lead but the keeper saved well with his feet. Josh Gilchrist, who had impressed on his debut, was replaced by Michael Speed, while Adam Shanks, having recovered from injury, took the place of Morien, who had posed a real threat especially after the interval.

Rather than sitting back and attempting to hang on to their narrow lead, Whitley pressed forward and a defence splitting through ball from Luke Taylor, reached Shanks on the left. Cutting in past a defender, Bay’s top scorer powered a tremendous shot into the far corner of the net to put Whitley two goals ahead and in control of the game.

It was hard to tell that Whitley were a man short, as they defended superbly to earn a rare clean sheet despite Penrith's desperate efforts to find a way back into the game. Luke Taylor was outstanding with a series of well timed tackles which frustrated the Cumbrians. As the hosts pushed forward, they inevitably left gaps at the back and Whitley remained a threat on the break, and on the final whistle they received a well deserved ovation from the travelling fans.