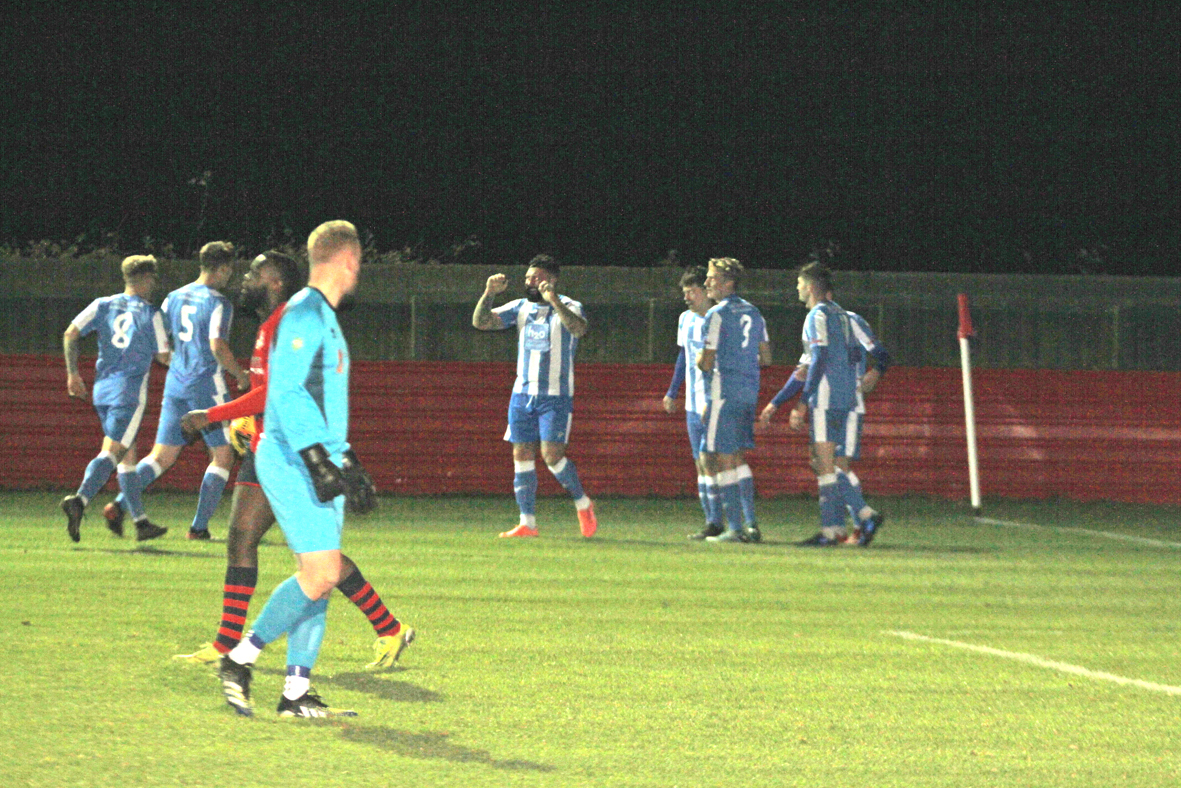 Whitley staged a dramatic comeback in the final half hour of this game, scoring three goals in a 14 minute spell to overcome a two goal deficit and claim victory on their first ever visit to Redcar Athletic.

On a cold night on the North Yorkshire coast, it was the hosts who made the livelier start and with just four minutes played Jordan Rivis tried his luck with a long range shot that was only just off target. Whitley seemed slow to get going and their first attempt did not come until the 19th minute when Henry Dorward’s 20 yard free kick was heading for the top corner until keeper James Dawson made a fine save, pushing the ball over the bar.

Redcar were passing the ball about accurately on the good playing surface and their pace down the left wing was their main attacking threat. Whitley gradually came more into the game and on the half hour, a neatly played ball by Malcolm Morien played Lewis Orrell through on goal but his effort was blocked at the expense of a corner, from which Luke Taylor headed over the bar.

A quick break by the home side almost brought the opening goal in the 35th minute, Nicky Martin racing away down the wing while Bay defenders appealed in vain for offside. His cross into the box left Rivis with just Dan Lister to beat but he put his shot past the far post. This was a lucky escape for Whitley but they were not so fortunate three minutes later when referee Jamie Cann awarded a penalty following a challenge on Isaac Walker by Scott Lowery. Rivis made amends for his earlier miss by converting the spot kick to put the Steelmen in front, a well deserved lead which they retained until the interval.

Twelve minutes into the second half, Whitley’s task became more difficult when they rather sloppily conceded a second goal. Quick passing moves in midfield set away Luke Chapman down the Redcar right and after going past a Bay defender who lost his footing, Chapman crossed to the back post where Martin had a simple tap in to make it 2-0.

If the Steelmen thought they were heading for a comfortable victory, those hopes were quickly dashed as Whitley produced a response within two minutes. Callum Anderson’s accurate pass found Orrell who played the ball into the box where Morien side stepped a defender and slotted home to halve the deficit. The momentum of the game had now completely changed and with Callum Anderson pushed into a more attacking role, Whitley were looking much more of a threat and in the 66th minute, they drew level. Craig McFarlane, attacking down the right, was allowed space and when he crossed the ball into the box, it reached Morien who knocked it home from near the back post. Seven minutes later, the turnaround was complete when substitute Adam Shanks skipped past three defenders just outside the box before placing a tremendous chip shot over the advancing keeper and into the net to the delight of the Bay fans behind the goal.

Redcar tried to get back in the game but Whitley defended solidly and might even have extended their lead. Shanks fired over the bar, Anderson saw a shot deflected behind for a corner and in stoppage time Orrell went close but by this stage the hard work had been done and Whitley were on their way to a confidence boosting third consecutive league victory. In doing so, they completed a quickfire double over the First Division newcomers.