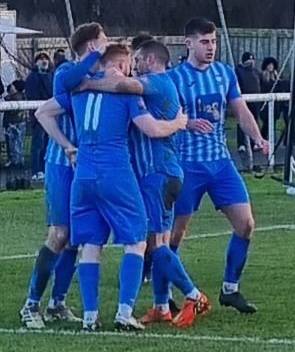 Bay manager Nick Gray was able to look back with great satisfaction on Whitley’s 2-1 victory in their Boxing Day top of the table clash at local rivals Ashington.

“Probably the most satisfying result of the season if I’m being honest. First half they looked more dangerous on the counter attack and scored a goal early when we left them open then Dan Lister’s made a very good save 1 v 1 then the penalty which I think was a soft penalty but they missed it. I said to Liam with 10 - 15 minutes of the half left ‘I just hope we get in at half time with it 1-0’. To be fair the breeze against us was strong.”

It was a completely different story in the second half as Whitley turned the game on its head.

“We had a few words at half time. Our team’s got plenty of energy but I thought we didn’t seem to use much energy first half. We came out of the traps really well second half, started excellent, won the ball then moved it quickly and scored. In fact we scored two goals in ten minutes. They did have a bit of possession second half but they never really hurt us. They got into the final third but there was not a lot of goalmouth action at both ends. We were down on numbers a bit and people weren’t feeling 100% so we only used the subs when we had to use them and we got through it, a satisfying result. We were really, really pleased with the result.

“At Ashington when you go a goal behind you think it could be a long hard afternoon but one thing I’ll say about the group we’ve got is they’re very resilient. They don’t know when they beaten, they don’t give up, they keep on going even if they’re not having the best of games. We hung in there, we fought for every ball and I’m delighted with the three points. It wasn’t a very good spectacle as a game of football but its Boxing Day and at this level it’s very rarely that you do find good games of football because it’s a family time and they’re volunteering to come out but our lads gave their all and it was really very satisfying. Not the best performance of the season, but as results go the most satisfying of the season against a very good side who’ve got some excellent players and will be up there at the end of the season that’s for sure.

“We had a couple of injuries in the game and I’d like to thank the Ashington physio who helped us out because our own physio Kevin couldn’t be there. His son’s in hospital and we pass on our good wishes to him and also to our secretary Derek Breakwell who hasn’t been well. There were people who couldn’t be there at Ashington on Monday and they’re in our thoughts and we wish them a speedy recovery.”

This was the first game for three weeks following the recent bad weather but Nick explained that the players have been working hard in training. “We’ve been training three times a week. We’ve been on the beach. It’s hard but it’s the same for every team in non league football. We’ll be training again tomorrow then we’ll give them the weekend off but we’ll be back in training twice next week preparing for Saturday” (at home to Carlisle City)

At the half way stage of the season, Whitley are lying in second place, 5 points behind leaders Bishop Auckland but with three games in hand, while Newton Aycliffe have climbed above Ashington into third, a point behind Whitley but having played two more games.

Going into the New Year, Whitley’s performances so far this season have probably exceeded the expectations of most fans but as the manager pointed out “We’ve got some good players here, we’re learning all the time. We’re quite a close group; apart from Andrei it’s the same group really since the start of the season. We’ve just lost 2 games in the first 19 which is a massive improvement on last year. In the second half of the season it’ll be interesting to see how we go. Teams will know us more and be more aware of us, and likewise we’ll know more about them. If we have as good a second half of the season as the first half, I’ll be delighted. We’ve played every team except Guisborough. I said to the lads second half of the season just go out and express yourselves, enjoy it.  The squad will be very similar second half as it has been first half unless someone pops up that we’ll try and go for, but we’re limited by our resources. We haven’t the biggest resources in the league but the key thing on that is we’ve got a very youthful squad. They‘ll get better with more minutes on the pitch and they’ve got nothing to worry about or fear about. We’re not a team like some teams at the top that might go and sign another player. We won’t be able to do that but even if you can, just going and signing another player doesn’t guarantee you success. I think we’ll benefit more in the second half with the lads getting more minutes on the pitch. We haven’t got the biggest squad but we’re delighted where we are. Maybe we’re punching a little bit above our weight but the league table doesn’t tell a lie. I keep on reminding the lads that we’ve had a good first half of the season, a very good first half of the season. We’re in the semi final of the Senior Cup, but the one disappointment is the Vase. However for me that just shows where we do lack a little bit. There are some games when you’re not going to play very well and have got to grind out results. We were a little bit unlucky in the Vase but we learn from it and in the second half of the season we just need to continue as we’ve done in the first. We’re really looking forward to it and we’ll see how high we can finish in the league. I think if you look at it now there’s probably about five or six who think they’ve got a chance of winning it and we’re definitely one of the teams in that mix. Everyone seems to be beating each other, Bishops lost at Newton Aycliffe, who I think are probably the best team we’ve come across.  We’ve got a tough month coming up and we’ll take them as they come. We’ve got away games at Penrith, Redcar and Newton Aycliffe as well as home games against Carlisle and Seaham. I just hope that the weather’s kind to us and we can get at least four out of the five games played.”