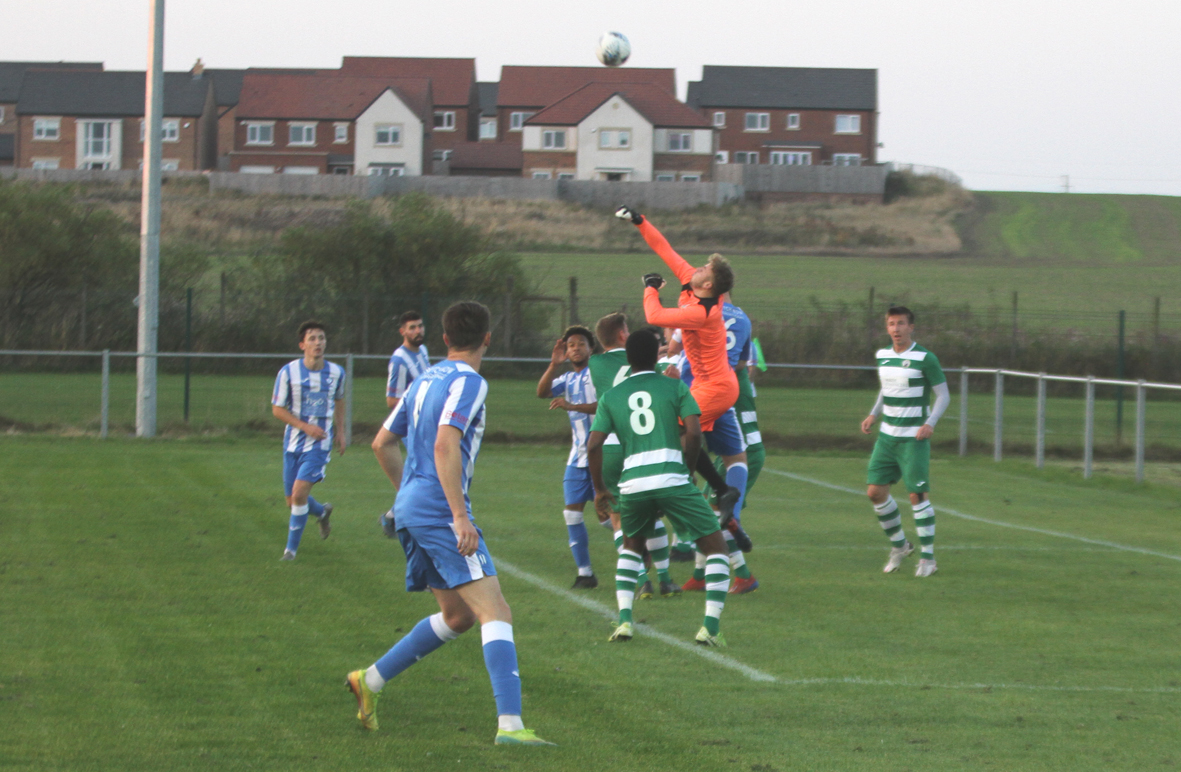 The points were shared in this local derby at West Allotment but not for the first time in recent games, Whitley created enough chances to have won comfortably but could not capitalise on their opportunities. It all looked very encouraging when Luke Taylor headed them into a 19th minute lead but a penalty just before half time got Allotment back in the game and despite plenty of endeavour, neither side could add to their score in the second half.

The game began at a rapid pace and Allotment had the first chance after six minutes but Thompson volleyed the ball high over the bar. Whitley were dealt an early blow when Joe Malone was forced out of the action through injury after just ten minutes. However, they were looking the better side and deservedly took the lead in the 19th minute when Luke Taylor rose to head home from Ben Gaffney’s free kick. Two minutes later they almost doubled their lead, but Matty Weirs saw his shot pushed over the bar by keeper Finn Hodgson.  The home side were struggling to retain possession and Hishi Lama was next to get an attempt on target but Hodgson made the save. Good approach work gave Whitley another opportunity in the 33rd minute but Jon Weirs fired just over the bar. A rapid break to the other end briefly threatened but a timely tackle by Jamie Dunn averted the danger.

Allotment’s defence looked vulnerable to balls played into the box and when Whitley won another free kick, Taylor went close to doubling the lead but could not keep his shot down and it cleared the bar.

Dan Lister made a good low save three minutes later but with the interval approaching, Whitley were penalised for a trip on Baltazar and the hosts were awarded a penalty. The spot kick was delayed while Craig McFarlane received treatment for a hamstring injury he suffered moments earlier. Unfortunately the Bay skipper was unable to continue and had to be replaced after half time. Meanwhile, Callum Larmouth confidently slotted the penalty into the bottom corner of the net to level the score against the run of play.

Almost immediately after the resumption, Jon Weirs was tripped just outside the Allotment box but Dunn’s free kick was comfortably gathered by Hodgson. Four minutes later the home side went close with Larmouth forcing Lister to make a fingertip save to push a fiercely struck shot over the bar. The Weirs brothers then combined to set up an opening for Jon whose shot was blocked. It was developing into a more even game with both sides creating chances and just past the hour Lister made a double save and had to dive full length to keep out a shot from Hayton.

Play swung quickly to the other end where Richard Coulson sent a header narrowly over the bar from Chanayire’s cross.

In Allotment’s next attack down the left wing, the ball ran out of play and when a goal kick was awarded, Baltazar made a comment to the referee and was promptly shown a red card. Play was held up while the player became involved in flare up and had to be escorted from the pitch. With their opponents down to ten men, Whitley looked to press home their advantage and they pushed forward in search of a second goal.

Ten minutes from time Lama had a shot blocked then Chanayire’s attempt struck the bar as Allotment struggled to get the ball out of their own half. Matty Weirs then got an attempt on target but it was saved by Hodgson. Twice Whitley forced corners but could not capitalise then into added time, Allotment might have snatched victory but a great save from Lister denied substitute Jones.

One last opportunity came deep into stoppage time but Taylor’s header from Kharufa’s corner flew agonisingly just over the bar.