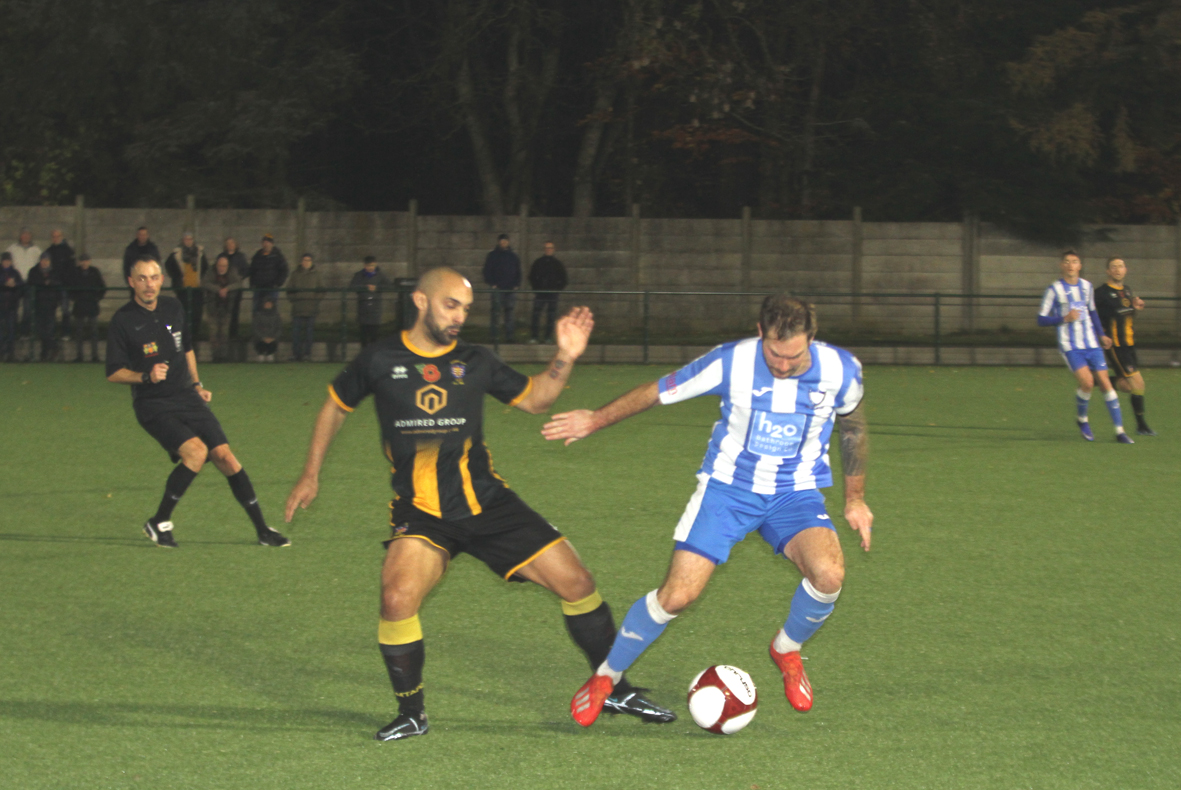 The two division difference in status was clear to see as holders Morpeth Town eased comfortably through to the next round of the Northumberland Senior Cup on their new 3G pitch at Craik Park.

Whitley handed a debut to 19 year old John McGivern but striker Malcolm Morien was ineligible and Adam Shanks, recovering from injury, was not risked after undergoing a late fitness test.

Morpeth dominated possession in the early stages and after 14 minutes Dan Lister made a fine save to keep out a shot from Andrew Johnson. In Whitley’s first attack, Richard Coulson played the ball through to Craig McFarlane but the Bay captain was thwarted by Morpeth keeper  James Anderson.

The hosts deservedly took the lead in the 19th minute when Johnson curled an excellent shot beyond the reach of Lister and into the net. Three minutes later Morpeth doubled their lead when they cut through the Bay defence and Ben Ramsey fired home.

Slick passing and pace down the wings was causing problems for Whitley with several visiting players losing their footing on the surface and it took them until the half hour to force a corner which was cleared by the home rearguard. Coulson then got a sight of goal but his shot was off target.

Morpeth added a third goal in the 34th minute, effectively putting the tie beyond Whitley. A low cross from the right across the Bay goal was not cut out and was slotted home by the dangerous Johnson, the former Ashington and Spennymoor striker claiming his second goal of the night.

In Whitley’s next venture into the Morpeth half, Coulson played a good ball through the home defence but Anderson came out to claim the ball just ahead of Lewis Orrell. Shortly before the interval, a Morpeth free kick from around 25 yards curled wide as the hosts ended the half well on top.

Seven minutes after the resumption, the Highwaymen added a fourth goal when Ramsey whipped in a cross which was knocked home at the far post by Jack Foalle, one of three former Bay players in the Morpeth side.

Whitley were being given very little time on the ball and they needed to take every opportunity that came their way to create any goalscoring opportunities. On the hour, McFarlane scuffed his shot after good approach work but shortly after, down at the other end, it took a fine save from Lister to deny Ramsey.

With the Whitley midfield having to work extremely hard to contain their experienced Morpeth opponents, all three substitutions were made to bring on fresh legs, and Jamie Dunn, Jason Chanayire and Shaun Dippenaar contributed well after coming off the bench. Two minutes after being introduced, Chanayire was caught narrowly offside as he threatened to break away down the left wing and the same player set up a chance for Coulson who was denied by Anderson. Dippenaar then fired a good effort narrowly wide after a free kick was played short. Liam Henderson missed a glorious opportunity for the home side 13 minutes from time when after breaking clear he put his shot beyond the far post, but credit is due to Lister for closing down on the Morpeth substitute and narrowing the angle for his shot.

Whitley were enjoying much more of the possession in the closing stages but were never able to seriously threaten the home goal as Morpeth comfortably saw out the game to earn a home tie against Blyth Spartans in the Quarter Finals.