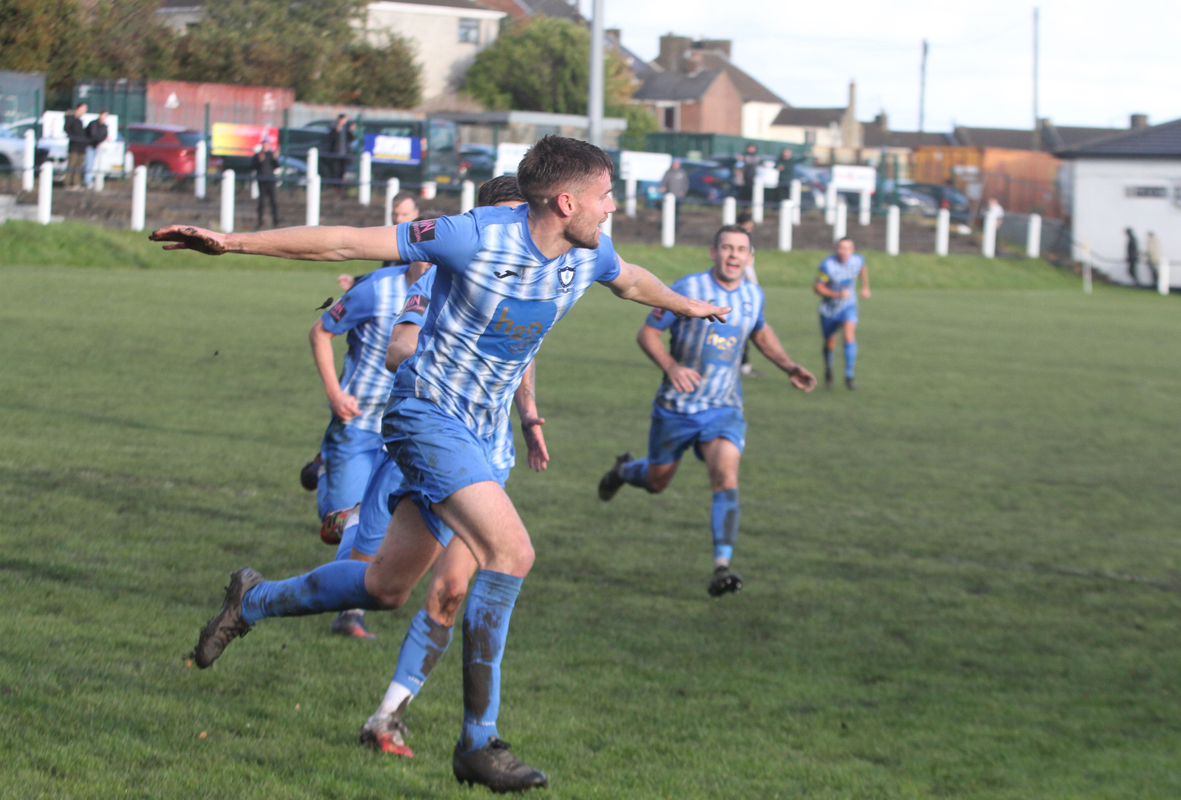 Not for the first time in recent games, Whitley’s never-say-die attitude reaped rewards with a 90th minute goal proving crucial as they came away with a hard earned victory from their trip to Tow Law Town. The Lawyers were promoted back to First Division this season after a gap of 11 years and on the evidence of this game they look more than capable of retaining their top flight status.

In appalling weather conditions, Whitley scored twice in the first nine minutes before the hosts fought back to draw level, setting up a dramatic climax as the skies cleared to bright sunshine late in the game.

The downpour began just before kick off, leaving fans at the highest ground in the Northern League hurrying for cover from both the rain and near gale force wind.

Despite the conditions, Whitley started well and in the fourth minute Ben Richardson tested Tom Orton with a shot that the keeper pushed away from goal. Barely sixty seconds later, Orton could only parry another powerful shot from Richardson across goal and Malcolm Morien seized on the ball, slotting it home from close range.

Keeping up the pressure, Scott Lowery sent a header across the face of goal before the ball was headed clear by a defender.

In the ninth minute Lewis Orrell broke forward and played the ball through to Cameron Brewis. The young striker got a shot on target and once again Orton could not hold on to it and in similar fashion to the first goal, Morien pounced on the loose ball to knock it into the net.

Two goals ahead inside the first ten minutes, Whitley looked to be in control of the game but Tow Law battled back and Lowery had to clear an effort off the line from former Bay striker Andrei Ardelean.

Six minutes later the hosts won a corner on the left and when the ball was crossed into the box, Lister punched clear. When Adam Hutchinson challenged for the ball, his opponent went to ground and the referee awarded a penalty. Ardelean stepped up to take the spot kick and sent Lister the wrong way, to bring the Lawyers back into the game.

Whitley continued to pose the greater threat and Bailey Geliher very nearly restored the two goal lead with a shot from out on the right across goal but the ball went inches beyond the far post. Morien and Harvey Neary both had attempts saved before Lowery thought he had added a third goal with a back post header but it was ruled offside.

The conditions were hampering both sides as passes went astray and chances during the remainder of the half were at a premium.

After the break Tow Law started more positively with a greater share of possession. They were quick to the ball, tackling strongly and denying Whitley time to settle on the ball. As the game approached the hour mark the home side were beginning to pose a real threat. Richardson had to make a goal line clearance and another attempt was put behind for a corner. The pressure paid off with 62 minutes on the clock when a corner was only partially cleared and the ball was played across field to the right. It was swung back into the six yard box where Anderson-Da Costa headed home to draw the sides level.

Having let slip a two goal lead it looked as if Whitley would face a tough last half hour but to their credit they stepped up a gear, playing more positively and forcing the hosts back into defence. Sam Irons, attacking down the right, sent a cross down the slope towards the back post where the keeper got his hands to the ball pushing it behind.

Anderson-Da Costa wasted a great opportunity when his side broke away down the right. A cross into the goalmouth cleared Lister but the man who got his side’s second goal mis-hit the ball and Lister was quick to dive on it.

The longer the game went on, and with sunshine now bathing the Ironworks Road ground, the more Whitley were getting the upper hand. Substitute Joe Groves-Forbes was causing problems with his pace down the right and twice he was brought down by tiring defenders as he threatened to break into the 18 yard box. From one of these, Richardson’s free kick was glanced just beyond the far post by another substitute Josh Gilchrist.

With the game about to enter stoppage time, Tow Law struggled to deal with another attack down the right and from almost on the by-line, Groves-Forbes crossed into the six yard box where Lowery fired the ball home with a first time shot that left Orton helpless and sparked scenes of jubilation among the Bay players and fans.

Once again, Whitley’s persistence and pressure right to the end had paid off and the final whistle signalled a hard fought victory at a notoriously difficult venue for visiting teams.