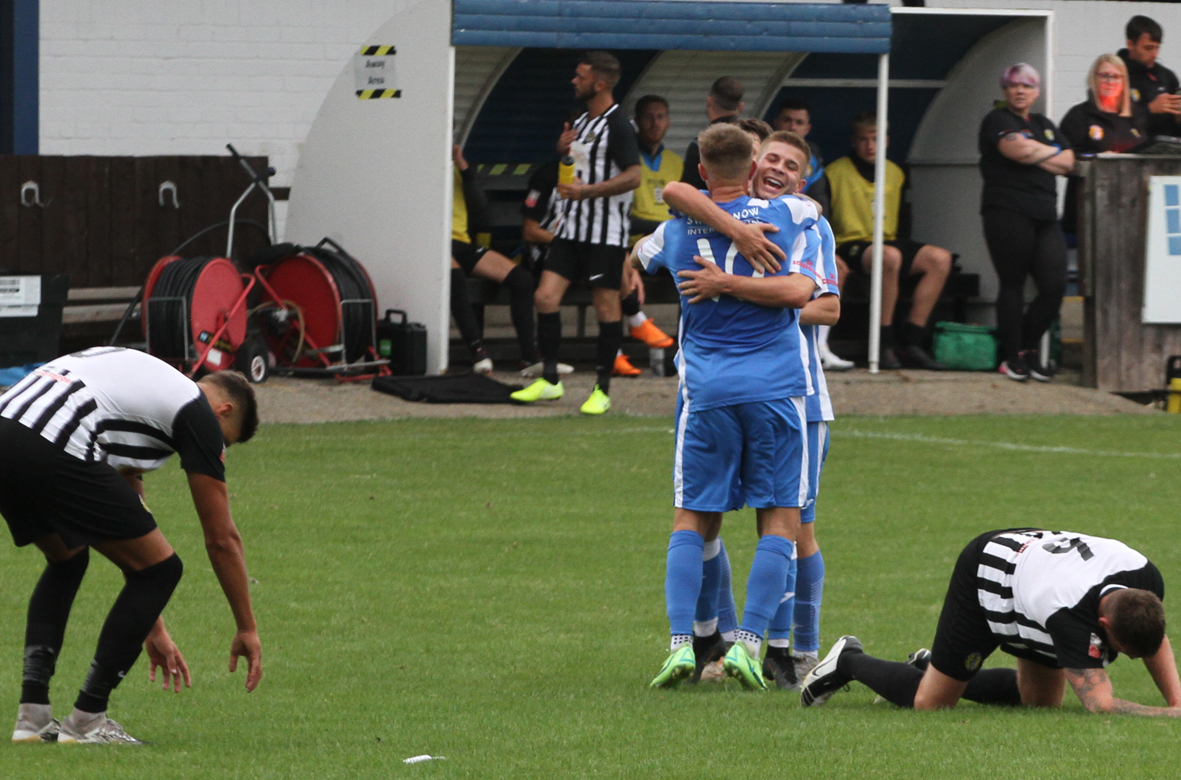 Whitley got the new season off to a fine start with a well deserved victory over Whickham in front of a bumper crowd at Hillheads. Clearly relishing the freedom to watch football after the Covid enforced restrictions of the last 16 months, almost 450 fans were present to enjoy an entertaining and competitive game which included top quality goals from the home side.

There were two debutants in the Bay starting eleven, midfielder Hishi Lama and striker Joe Malone, and both made significant contributions.

Straight from the kick off, Whitley went on the attack and Malone forced a corner with barely 15 seconds played. When the ball was crossed into the box, Matty Weirs sent a header over the bar. Whitley were looking much the better side in the early stages and they took a deserved lead after 12 minutes when Jon Weirs played an inch perfect ball through the Whickham defence to Richard Coulson who went round keeper Jack Norton before slotting the ball into the net.

Whickham responded three minutes later and it took a good save from Dan Lister to deny Zak Atkinson and equaliser. Newton then sent a header wide of goal as the visitors came more into the game but with 20 minutes played, Coulson had a chance to double the lead but he fired wide of the target. Just past the half hour, Atkinson went close for Whickham, who were now posing much more of a threat.

When Whitley pushed forward, Matty Weirs was denied by a fine save, Norton keeping the ball out with his feet, before play once again switched to the Hillheads Road end where Callum Anderson made a timely tackle to block an attempt by Howard. Whitley retained their one goal lead at the interval but Whickham were still very much in the game.

Into the second half, the visitors enjoyed more possession but were unable to break down a solid looking Bay defence. Norton kept his side in the game with another good save with his feet in the 64th minute, this time keeping out a shot from Jon Weirs. Moments later, Whickham mounted an attack down the right but the final ball lacked accuracy and failed to trouble Lister, flying well wide of goal.

Whitley, who always posed a threat with their pace and created the greater number of scoring opportunities, almost broke clear in the 68th minute, when McFarlane played a ball down the right wing to Malone but determined defending denied him a chance on target.

Two minutes later, another long ball down the right caused problems for the visitors and when Norton raced out of goal, he mis-hit his attempted clearance and it fell for Malone who from fully 35 yards, cleverly lobbed the ball over the keeper and into the unguarded net.

Whickham heads dropped and Whitley now with a two goal lead, looked in control of the game but with five minutes left, the visitors got back in the game in somewhat fortunate circumstances. Atkinson played a low ball into the box from the right wing and in an attempt to cut it out, Anderson got a foot to the ball but it looped high over Lister and dipped just under the bar, despite the keeper’s best efforts to get a hand to it and palm it over the bar.

This lifted the Whickham players who pushed forward in search of an unlikely equaliser. However, it was Whitley who came closest to scoring in the closing stages, Malone smashing a shot against the bar before Lama drove a powerful effort inches over the top. Loud appeals by the visitors for handball inside the Whitley box were waved away by referee David Pill before the final whistle signalled a winning start to Whitley’s season, to the delight of the home fans.