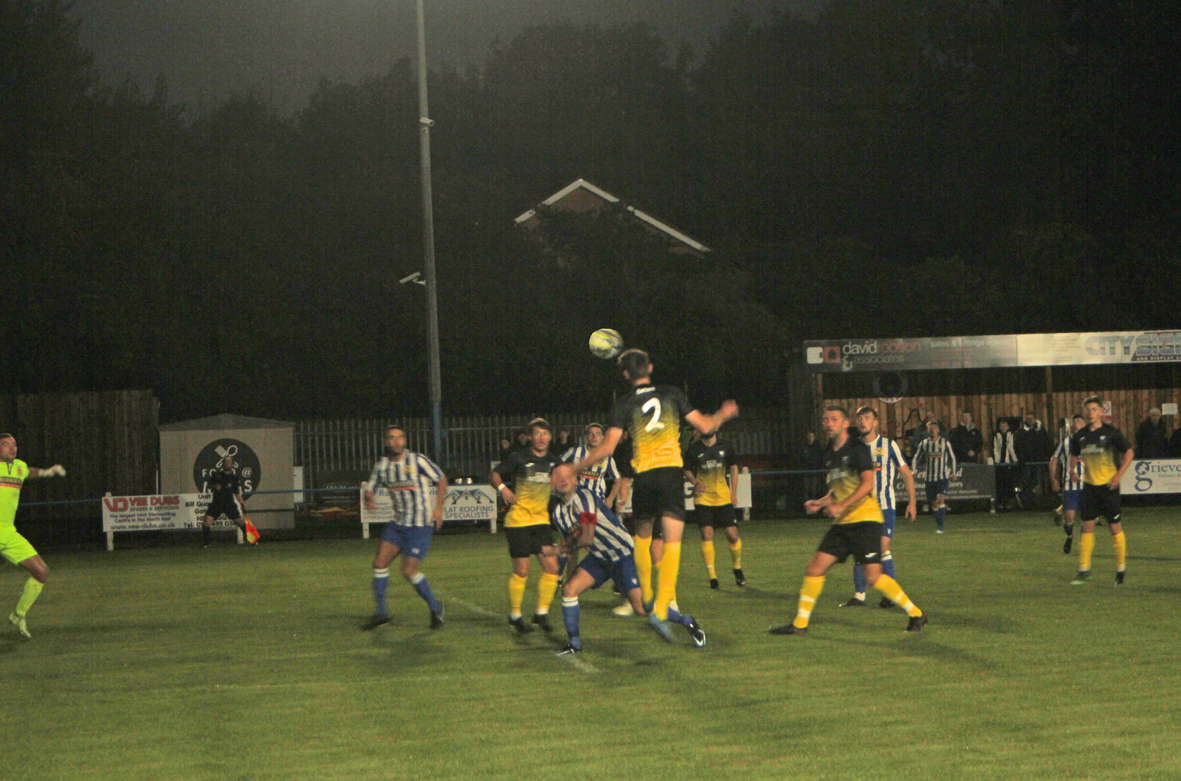 Friday night’s high scoring local derby at Newcastle Benfield ended in a 3-3 draw after Whitley battled back from 3-1 down. Bay manager Nick Gray agreed that it was a fair result. “I think so, I didn’t think we did enough to win it and we didn’t deserve to lose it, but as I said to the lads in there, they’re disappointed and I think it shows where we’ve come from really. I’ve been in teams where if you’re 3-1 down, they give up but our lads didn’t give up and in the end we could have scored, they could have scored, but I think it was a fair result tonight, a 3-3 draw.

“The rain today has made the ball skiddy on the pitch. Both teams were at it from the start. I thought we started quite well to be fair. They got their noses in front but we came back at them so I was pleased about that. It was a great delivery by Scott Lowery for the equaliser. I’m pleased with Sean Taylor and it was good to see him scoring, and Cameron Brewis got off the mark tonight with his first goal for the club. I’m delighted for both of them, but I think from 1 to 18 they all did well today. When you think about bringing players on, no disrespect to anyone but we had no weakness when we brought them on. You bring people on to freshen things up. We’ve got a great squad here and for them to be disappointed at a 3-3 draw - we got battered here last year - it shows how far we’ve come in a short space of time.”

Having a penalty saved and seeing the opposition go straight to the other end and score could have been a turning point in the game but that was not how it worked out. “Harvey struck it (the penalty) well, it was a good save by the goalkeeper. You’ve got to give the keeper credit. It’s one of those things, you can miss the chance. But it didn’t affect his game. Harvey kept on going and did well. They went up the other end and scored, a deflected shot and we’re 2-1 down. I thought we haven’t played great and at half time I said ‘tidy up your passing’. I thought we were a little bit sloppy in defence as well, but to be fair to the lads, after going behind 3-1, weaker teams would have thrown the towel in so it shows what character the lads have got.

“It’s an away game; we’ve played 11 games and only lost once.  We’re on a decent run. I don’t think it was one of our most fluent performances but I was pleased with some aspects of the game. We didn’t let our head go down, we kept on going. We got fresh legs on and they kept going forward. It just shows that we’re going the right way. Benfield are better than they were last year as well. They’ve got some good players, individually and as a team so yes it was a tough test and they probably thought at 3-1 they were going to see it through. It was an entertaining game for both sets of supporters and the neutrals.  We’ll take the positives and there were more positives than negatives and we look forward to Tuesday.”