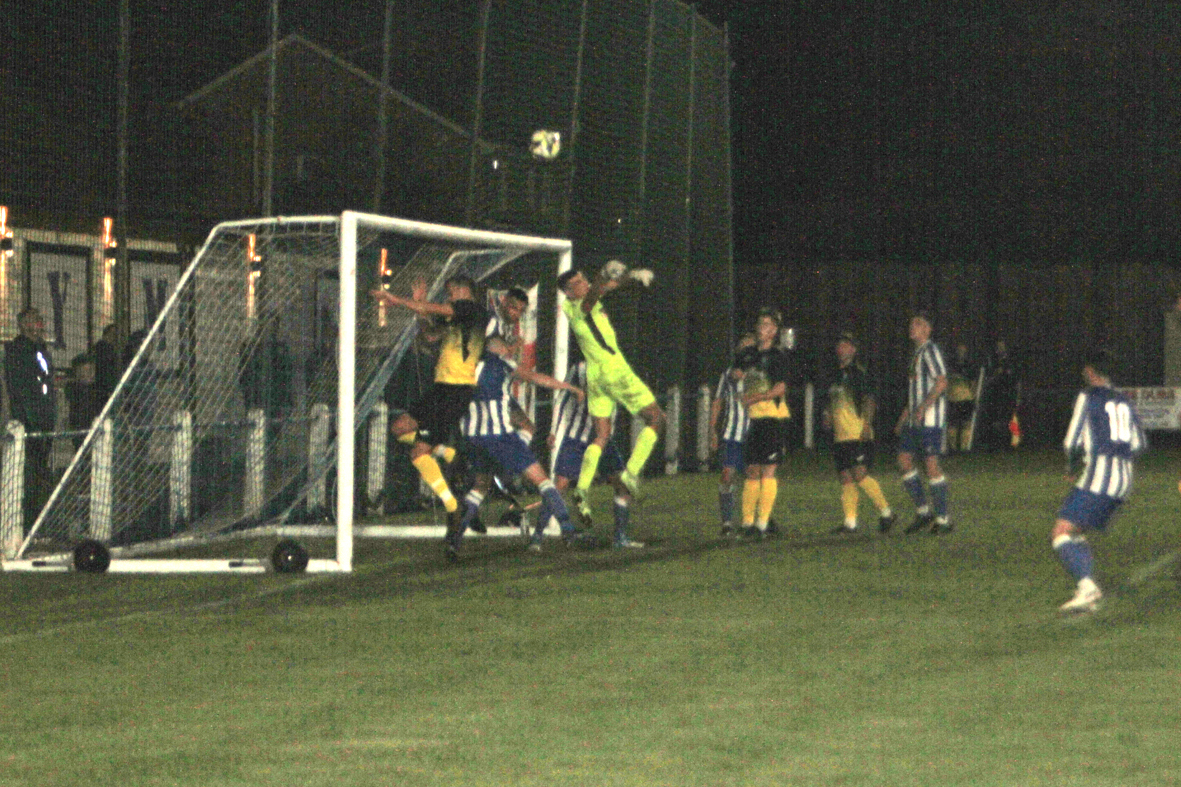 This action packed local derby produced rich entertainment for the bumper Friday night crowd and in the end a draw was a fair result. The point gained was enough to take Whitley briefly back to the top of the table ahead of Bishop Auckland, who regained top spot 24 hours later but have played one game more than the Bay.

After torrential rain during the day, it was a fine and calm evening at Sam Smith’s Park and although the surface was wet, the pitch was in excellent condition.

The game got underway at a rapid pace and inside the second minute, Scott Lowery’s header was pushed wide by Benfield keeper Alfie Gordon. Two minutes later play switched to the other end where Dennis Knight brought a fine diving save from Dan Lister.

Both sides were looking to attack at every opportunity and with seven minutes played, a ball was played into the Whitley box from the Benfield right. Michael Hall slipped on the wet surface as he attempted to make the clearance and the loose ball was pounced on by Layton Watts who drilled it past Lister low into the net to give the home side an early lead.

Back came Whitley and Gordon did well to block a strong shot by Elliott Day. It was end to end action with good quality play from both sides and Whitley were rewarded for their efforts in the 17th minute when Lowery raced down the right and delivered a perfect cross beyond the Benfield defence where Sean Taylor was waiting to slot home from six yards.

The goalmouth action was relentless and eight minutes later Taylor was about to break clear on goal but was denied by an offside flag.

Having cleared a dangerous looking move by the hosts, the hard working Taylor was instrumental in another Bay attack on the half hour when his cross from the left cleared the home defence but Lowery’s header was bravely blocked on the line by the keeper. Day was the victim of several robust challenges as he tried to break down the left wing, Benfield clearly aware of the threat he posed.

Whitley were looking slightly the better side at this stage and three minutes before the interval they had a glorious opportunity to take the lead. Luke Porritt’s surging run into the left side of the box was brought to an abrupt stop when he was sent sprawling and the referee immediately pointed to the spot. The Benfield players were incensed at the decision and protested strongly before calm was restored. Harvey Neary took the penalty kick but his effort was saved low down by the diving Gordon.  Play quickly switched to the other end where a shot from the left edge of the box by Knight took a deflection off Stephen Turnbull, wrong footing Lister with the ball skidding across the wet surface into the net. From being in a position to go in front, Whitley were suddenly a goal behind. A breathless first half soon came to an end with Benfield holding a 2-1 lead and the crowd enthusing over some outstanding football from both sides.

Six minutes after the restart came the second penalty of the game when Lowery was penalised for a challenge on Watts in almost the same position as when the earlier spot kick was awarded. Knight stepped up to take the kick and despatched the ball into the bottom corner, beating Lister’s dive. With a two goal lead, Benfield looked to be in control and Whitley appeared to be heading for only their second league defeat of the season but they battled their way back and just before the hour they reduced the arrears when Neary played the ball through to Cameron Brewis who advanced before unleashing a great shot that flew into the roof of the net.

Lister made a fine save to keep out a shot from Watts before a great move by Whitley with Brewis involved again saw Lowery denied by another top quality save from Gordon.

With just over a quarter of an hour remaining, Whitley won a corner on the left and when Porritt delivered the ball into the goalmouth, Gordon could not connect strongly enough to punch it clear and on the edge of the box, Day smashed the ball into the net through a crowded defence to draw Whitley level, to the delight of the large contingent of travelling fans.

Neither side was prepared to settle for a point and the Bay fans began to believe that a dramatic turnaround was possible. Given the tremendous pace at which the game had been played, players were inevitably starting to tire and both sides made substitutions in the closing stages.

Whitley’s best chance of snatching victory came after Day and Gilchrist had taken the ball down the left and when it was played into the box, Adam Shanks poked the ball goalwards but just the wrong side of the post. At the other end a high ball into the goalmouth almost eluded Lister deep in stoppage time, but the ball was deflected behind and the corner was cleared.

With top quality attacking football which produced six goals this was local non league football at its best and a credit to both teams.