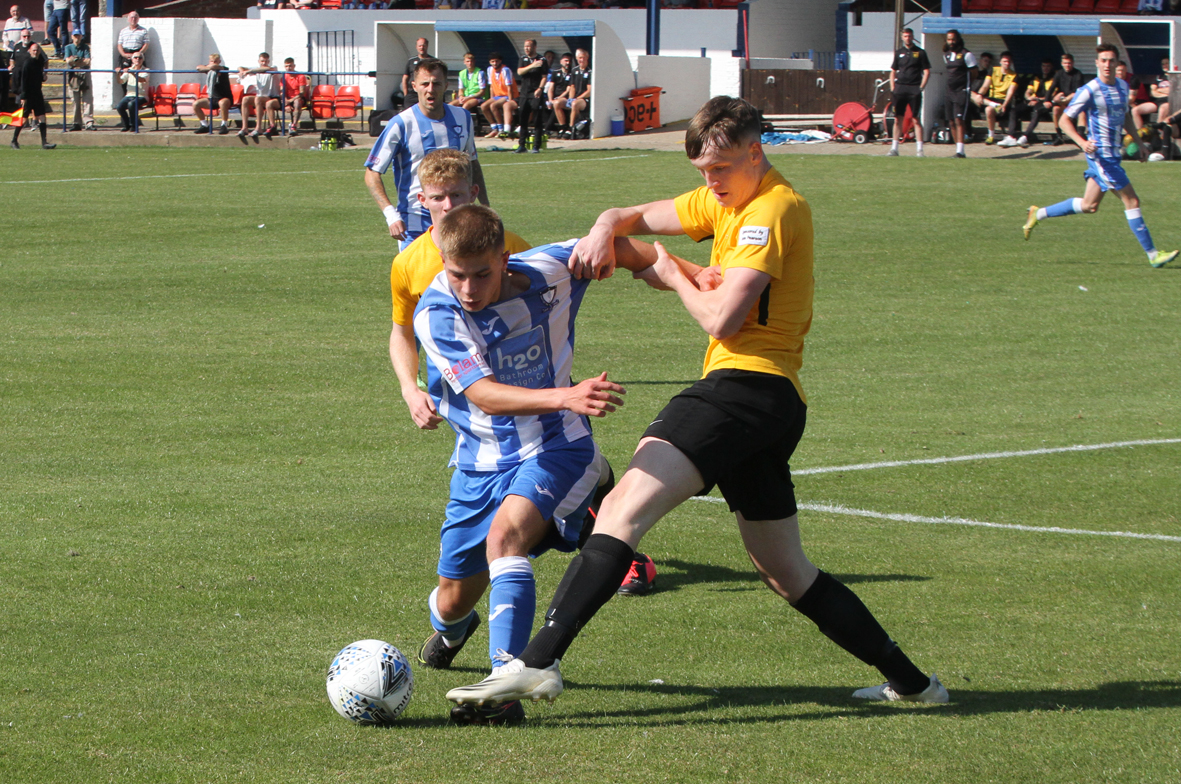 On an extremely frustrating afternoon for Whitley Bay, visitors Crook Town performed the classic ‘smash and grab’, defending in depth for long periods of the game before breaking away in the closing stages and snatching an unlikely winning goal.

Whitley dominated possession, especially in the second half when they created numerous chances but they could not break down a stubborn and well organised Crook defence and were eventually made to pay the price for failing to score for the first time this season.

With Scott Lowery and Khalid Kharufa picking up injuries in the midweek victory over Northallerton, Ben Gaffney came into the side for his first start in Bay colours.

On a glorious sunny afternoon, Whitley’s first chance came after ten minutes when Craig McFarlane cut in from the right, shrugging off several challenges before playing the ball across the face of goal but no Bay player was on hand to apply the finishing touch. Two minutes later Jason Chanayire tried his luck with an effort that drifted wide. Crook responded with Joey Smith getting in a shot which flew past the far post with Lister untroubled.

With 20 minutes played Whitley felt hard done by when Joe Malone broke clear and looked to be brought down on the edge of the box but the referee allowed play to continue. Two minutes later Mr Cain again waved away appeals for a free kick when Matty Weirs appeared to be tripped, again just outside the box after a challenge from a Crook defender. Still Whitley pushed forward and Weirs nearly made the breakthrough in the 24th minute but keeper Ronan Makepeace did well to push away his shot from point blank range. Richard Coulson then curled a shot inches wide of the far post before the game settled down with play confined largely to midfield. Jon Weirs came into the action ten minutes before the interval when his dangerous cross behind the Crook defence escaped the onrushing Bay forwards. Moments later his powerful shot flew just beyond the far post then two minutes before the break, he got an attempt on target but Makepeace made the save.

It was more of the same after the interval with another good chance coming when Chanayire broke clear on the right but rather than passing to an unmarked team mate he attempted a shot that was comfortably saved. Gaffney and Malone both went close as Whitley penned the visitors back in their own half.

Pushing players forward, Whitley were caught out in the 76th minute when completely against the run of play, Crook broke away down the right and a cross into the box was slotted home by Jamie Tumilty.

Unsurprisingly the County Durham side were happy to defend their lead while Whitley poured forward with wave after wave of attacks but their finishing lacked the crucial cutting edge. A bad challenge on Jon Weirs earned Crook substitute Joe Hillerby a caution but Whitley could not capitalise on the resulting free kick.

Into stoppage time Whitley forced a series of corners and a shot was blocked on the line before Chanayire’s header rippled the side netting.

For all their possession and pressure, Whitley could not find a way through and after four minutes of stoppage time it was Crook and their travelling fans who celebrated victory.