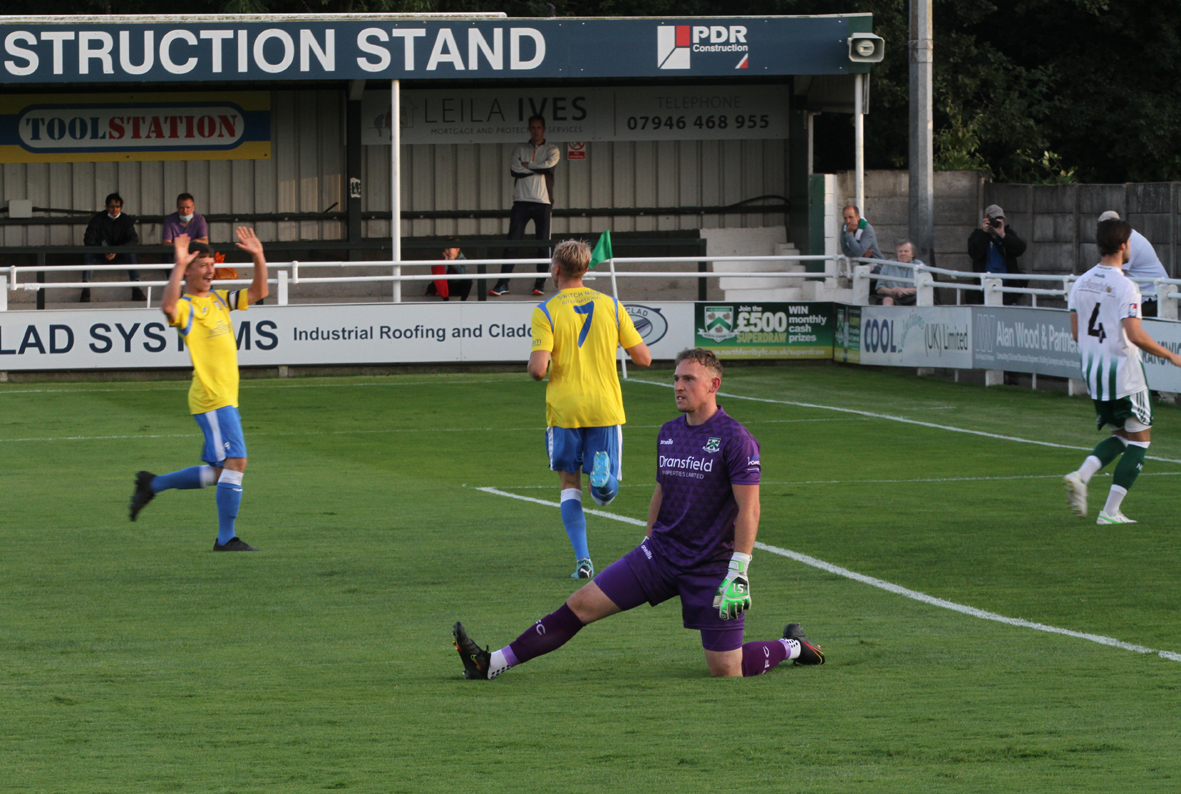 A stunning burst of three goals in less than six minutes immediately after half time put this entertaining cup tie beyond North Ferriby as Whitley marched confidently into the next round of the Emirates FA Cup.

Having been held to a 1-1 draw at Hillheads on Saturday, Whitley faced a long midweek journey to Humberside  for the replay and few could have imagined such a comprehensive victory over a side with a long unbeaten home record.

On a warm and sunny evening Whitley made the best possible start, taking the lead with just 90 seconds on the clock. An error in the home defence allowed Henry Dorward, making his full debut, to race clear on the right and he confidently slotted the ball past the advancing Exall.

Ferriby fought back and drew level in the 12th minute when McFadyen played a long ball into the box and Tom Corner got between two defenders to fire a low shot beyond Chris Bannon into the corner of the net.

There was little to choose between the sides at this stage but another mistake by the Villagers in the 28th minute saw Whitley restore their lead. A weak back pass resulted in Exall racing out of his area to clear the ball but Jason Chanayire quickly closed him down and the keeper’s clearance cannoned off the Bay midfielder and back towards goal. Chanayire was taking no chances and followed up the ball, tapping it over the line just ahead of defender Tarbotton, who failed in a desperate attempt to keep the ball out.

With 38 minutes played, Matty Plummer blazed a shot high over the Whitley bar after good approach work, and the same player had another opportunity just before the interval but once again failed to trouble Bannon.

Whitley held a one goal advantage at half time but the hosts were still very much in the game.

A quite astonishing opening six minutes of the second half put the tie beyond the reach of the Humberside team as Whitley took complete control.

Just 30 seconds had been played when Adam Shanks headed home Whitley’s third goal after Dorward got behind the home defence and crossed into the goalmouth to set up the chance. Three minutes later, a ball over the top of the Ferriby defence was seized on by Richard Coulson who guided it past Exall to make it 4-1. Barely two more minutes had elapsed when Shanks raced through a now bemused home defence and rifled the ball high into the Ferriby net.

5-1 up and with almost 40 minutes still to play, Whitley were now cruising to victory, and in an attempt to stem the flow of Bay attacks, Ferriby made a triple substitution. The move paid off and to their credit, the Villagers kept battling away and forced Bannon to make two excellent saves.

Both Luke Taylor and Jamie Dunn needed treatment following very physical challenges in the final quarter of the tie. Substitute Matty Weirs had a shot blocked by Exall and then Shanks went close to completing a hat trick but he could only get a glancing header on a cross from the right and the ball flew well wide of the target.

Six minutes from time, Ferriby gained at least a small reward for their persistence when substitute Harvey Carew slotted home a second goal after good work by Tarbotton. It was no more than consolation for a side that by now were well beaten. The impressive Dorward might have added a sixth for Whitley in the closing stages but his free kick from just outside the box failed to fine the target.

After five minutes of additional time, the final whistle signalled celebrations among the Bay team and the small band of travelling fans, while there was generous applause for the victors from the disappointed home supporters.

In previous games, Whitley had been criticised for failing to take their chances but this was a clinical performance when they made the most of their opportunities and every member of the side played their part.

They can now look forward to a much shorter journey in the Preliminary Round, when they travel to West Allotment Celtic for a local derby at their new home in Palmersville a week on Saturday.