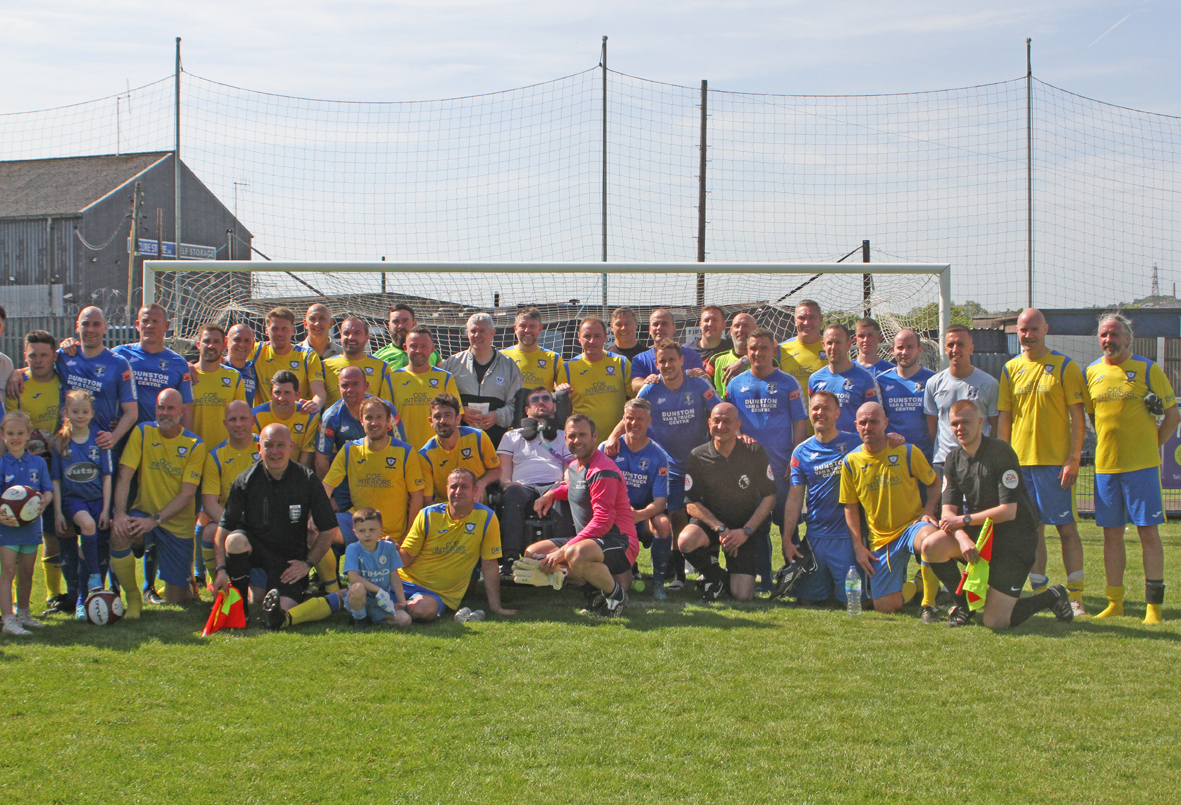 Dunston welcomed Whitley to the UTS Stadium for a charity game to mark the 10th anniversary of their FA Vase victory, with their squad from their 2012 triumph taking on a Bay side which included members of all their four FA Vase winning squads.

Only a handful of the players are still playing regular football but although the pace of the game was understandably a good deal slower than when these players were at their peak, their quality was still clear to see with a thoroughly entertaining and closely contested game.

Apart from bringing the players back together again, the main aim of the afternoon was to raise funds for St Oswald’s Hospice and gate receipts plus a raffle and tombola brought in well over £1200, an excellent achievement.

Whitley had the better of the opening stages with Paul Chow seeing a shot saved before Craig McFarlane’s long range effort beat the keeper but landed on the roof of the net. A number of changes were made as Whitley gave playing time to as many of their Vase heroes as possible. Richard Hodgson brought a save before Dunston scored a spectacular goal with Andrew Bulford firing into the top corner of the net giving Kyle Hayes no chance. It was just about the first real attempt on goal by Dunston and they kept their lead to the interval.

Among numerous changes after half time, Ian Chandler came on for a cameo appearance of around ten minutes, while legendary goalkeeper Terry Burke, and some of the 2002 heroes Chris Neil, Marc Walmsley, Ian Dixon, Andy Dugdale, Danny Anderson, Andy Bowes and Steve Cuggy were among those who came off the bench. The warm afternoon began to take its toll with regular changes being made by Bay’s Vase winning managers Ian Chandler and Andy Gowens. Whitley’s physio from the three Wembley Finals Glen Martin had a fairly quiet afternoon though Brian Smith had to come off after picking up a calf injury.

Midway through the second half Dunston extended their lead through two well taken goals from Danny Craggs but Whitley came back strongly in the later stages, Paul Robinson firing home from the edge of the box before Paul Chow found space inside the six yard box to crash the ball into the roof of the net with former team mate Mark Taylor watching on from behind the goal. It was wonderful to see Mark at the game more than 12 years after being diagnosed with MND and he was brought onto the pitch after the game to join the players for the squad photos.

It rounded off a memorable and extremely successful afternoon with players saying how much they enjoyed the reunion and sharing memories of the Vase winning years. Paul Robinson summed it up perfectly “What a day! I loved it!”