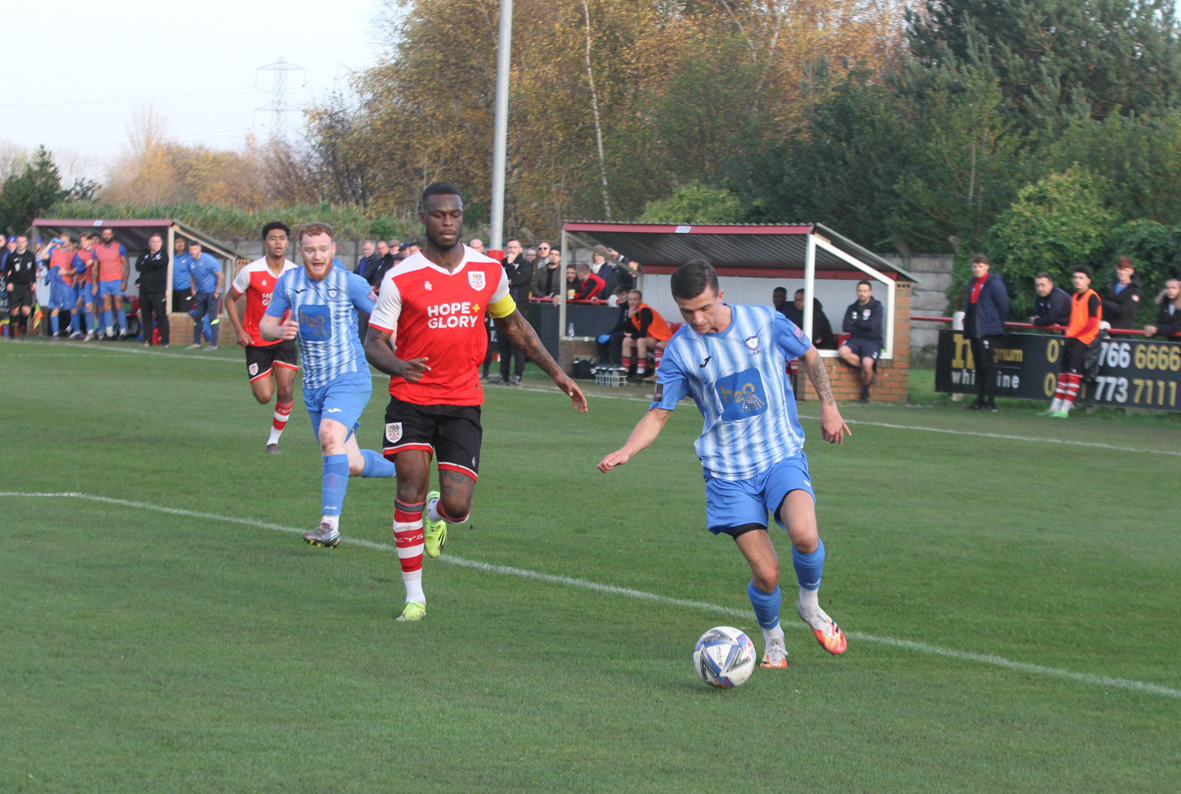 Whitley went out of the FA Vase in the most agonising fashion, beaten 8-7 on penalties after their tie at Prestwich Heys ended 1-1.

Prior to the Covid pandemic, extra time and then a replay would follow if the sides were level after 90 minutes, and over the years Whitley have featured in some dramatic ties that have gone to extra time. However, under the current rules, games go straight to penalties if there is no winner in normal time, so a closely fought game was decided by a gripping penalty contest that required 18 spot kicks to produce a winner.

On a sunny and mild autumn afternoon in north Manchester, the game got underway on an excellent playing surface with Whitley playing into a low sun. Fortunately for Bay’s young goalkeeper Pat Nash, the hosts were unable to test him with high balls into the goalmouth while the dazzling conditions lasted and the first action he was involved in was a low ball in from the right which he saved comfortably.

On the quarter hour, a cross from the left into the Prestwich box by Cameron Brewis was headed clear then shortly afterwards, Harvey Neary’s cross from the left saw Josh Gilchrist send a header just off target but keeper Jordan Hadlow was taking no chances and gathered the ball above his head. With 20 minutes played, a ball threaded into the box by Neary reached Richardson whose shot was headed out only as far as Gilchrist whose effort was comfortably saved.

When Scott Lowery was penalised 25 yards out on the left of the Bay goal for what looked minimal contact with Connor Berry, the free kick was played towards the back post by Dylan Fitzgerald and Prestwich captain Rudy Misambo climbed above the Bay defence to head goalwards. Nash managed to gather the ball but the assistant signalled that it had already crossed the line, giving the hosts a 23rd minute lead.

That was what turned out to be a rare attempt on target at either end. Both sides battled away but generally strong well organised defences were on top.

Whitley created an opportunity in the 32nd minute when Brewis was brought down as he burst through on goal, resulting in a caution for Misambo. Richardson’s free kick failed to trouble Hadlow, going just over the bar. Five minutes before the interval, a shot from Brewis was deflected off target and looped up over the bar and landed on the roof of the net.

Just before the interval, Sam Irons produced Whitley’s first real threat on goal with a powerful effort from just inside the box which Hadlow pushed round the post.

In stoppage time, Irons was cautioned for pulling back an opponent when put under pressure when receiving a clearance from Nash.

Early in the second half, Luke Porritt made progress down the left wing before putting over a dangerous cross into the six yard box. Unfortunately for Whitley, Brewis could not make a clean contact on the ball and the chance was gone.

The pattern of play continued with both sides working hard in midfield without being able to get a clear sight of goal. Harvey Neary was looking Whitley’s most effective player in midfield but after going past several challenges struggled to make to telling final pass. When he eventually played a diagonal ball beyond defenders to the back of the box, Richardson volleyed it across goal and beyond the far post.

The equaliser finally came in the 69th minute following a corner on the right. Richardson played the ball towards the back of the 18 yard box where substitute Elliott Day drove a powerful first time shot at goal. The ball was blocked but rebounded only as far as Josh Gilchrist who crashed it home from close range.

Boosted by the goal, Gilchrist went close barely a minute later with a shot on target that was blocked by a defender’s outstretched foot.

Thirteen minutes from time, Prestwich nearly regained the lead but a fine shot from Matt Davies was saved at full stretch by Nash.

Both sides pushed for a winner in the closing stages but neither really threatened so the game went to penalties.

Whitley went first and Ben Richardson got the shoot out underway with a confidently struck effort. Both sides scored with their first four attempts, Whitley’s scorers being Stephen Turnbull, Malcolm Morien and Elliott Day.

Their fifth penalty taker was Harvey Neary who saw his shot well saved by Hadlow. The drama continued as Pat Nash kept Whitley in the game diving to his right to keep out Prestwich’s fifth penalty.

Both sides scored with their next three spot kicks, Josh Gilchrist, Lewis Orrell and Michael Hall converting while their Prestwich opponents held their nerve to level the score each time, though Nash did get his hands to one attempt but could not keep it out.

Adam Hutchinson took Whitley’s ninth kick but Hadlow went the right way and made the save. Finally, with the 18th penalty to be taken, Cullen beat Nash to become his side’s hero and leave Whitley deflated.