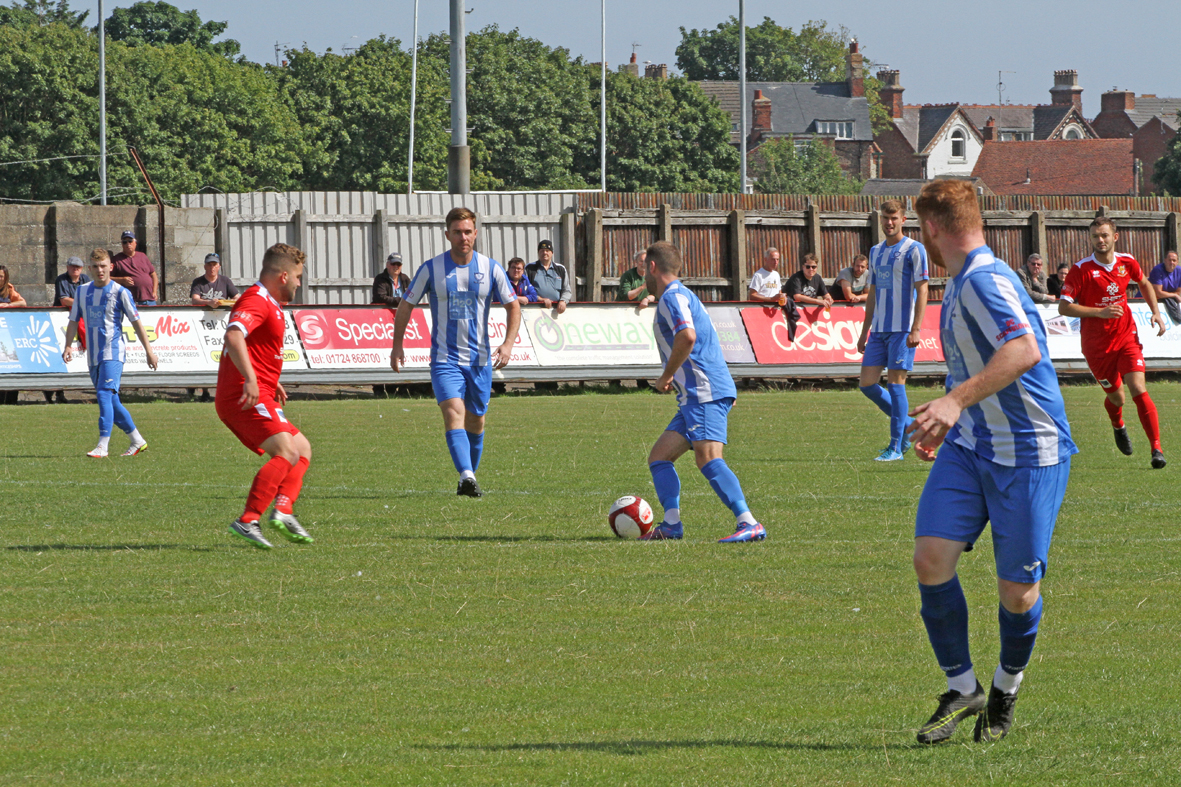 Whitley fell at the first hurdle in this season’s FA Cup going down to higher ranked Bridlington Town on the Yorkshire coast. It was a disappointing performance, particularly in the first half, when they conceded twice in a ten minute spell and never really looked like getting back in the game.

In the first quarter hour, there was little sign of what was to come as Whitley fully matched the home side, creating several openings. With 11 minutes played, Malcolm Morien’s glancing header from Lewis Orrell’s cross brought a save from Hitchcock but then Bridlington gradually worked their way into the game with Dennison bringing a regulation save from Lister. The home side began to grow in confidence and another effort from Dennison in the 19th minute brought a fine save from the Bay keeper.

Two minutes later Yates got past Sam Irons near the corner flag and played a ball into the Bay goalmouth which Michael Hall, under pressure from Andy Norfolk, headed into his own net to put the hosts ahead.

A quick retaliation by Whitley ended with Stephen Turnbull firing a shot high over the bar after a cross from the right by Orrell.

On the half hour Ben Richardson’s well struck effort was gathered by Hitchcock but the home side were posing the greater threat and they doubled their lead moments later. A shot from distance by Jack Yates bounced awkwardly on the bobbly surface and flew over Lister as he dived for the ball and it ended up in the net. While the goal was somewhat fortuitous, the Yorkshire side were fully deserving of their lead, as their pace repeatedly unsettled the Whitley defence. Indeed they might have gone further ahead shortly before the break but Lister did well to force Aydemir wide when through on goal and with his angle narrowed, he struck the ball into the side netting.

It was going to take a huge improvement in the second half to get Whitley back in the game but they continued to make little headway in attack and when Bridlington scored their third goal after 58 minutes, they looked to have the game won. The goal was a rather scrappy affair, as Dennison scrambled the ball home from a right wing corner, a half struck shot bobbling over the legs of Lister before trickling into the net.

Five minutes later Whitley had a glimmer of hope when Town defender Will Sutton handled the ball inside the box and Morien confidently despatched the resultant penalty beyond Hitchcock. The goal appeared to give the Bay a much needed boost and more purpose in their attacking play, with another effort on target from Morien just two minutes later. The introduction of pacy youngster Joe Groves-Forbes from the bench forced the hosts back in defence and the youngster nearly set up an exciting finale with a rising shot that only just cleared the bar after a Bay free kick was cleared only as far as the edge of the box.

However, Bridlington had little difficulty playing out the remainder of the game to secure another home tie in the next round, this time against Dunston.