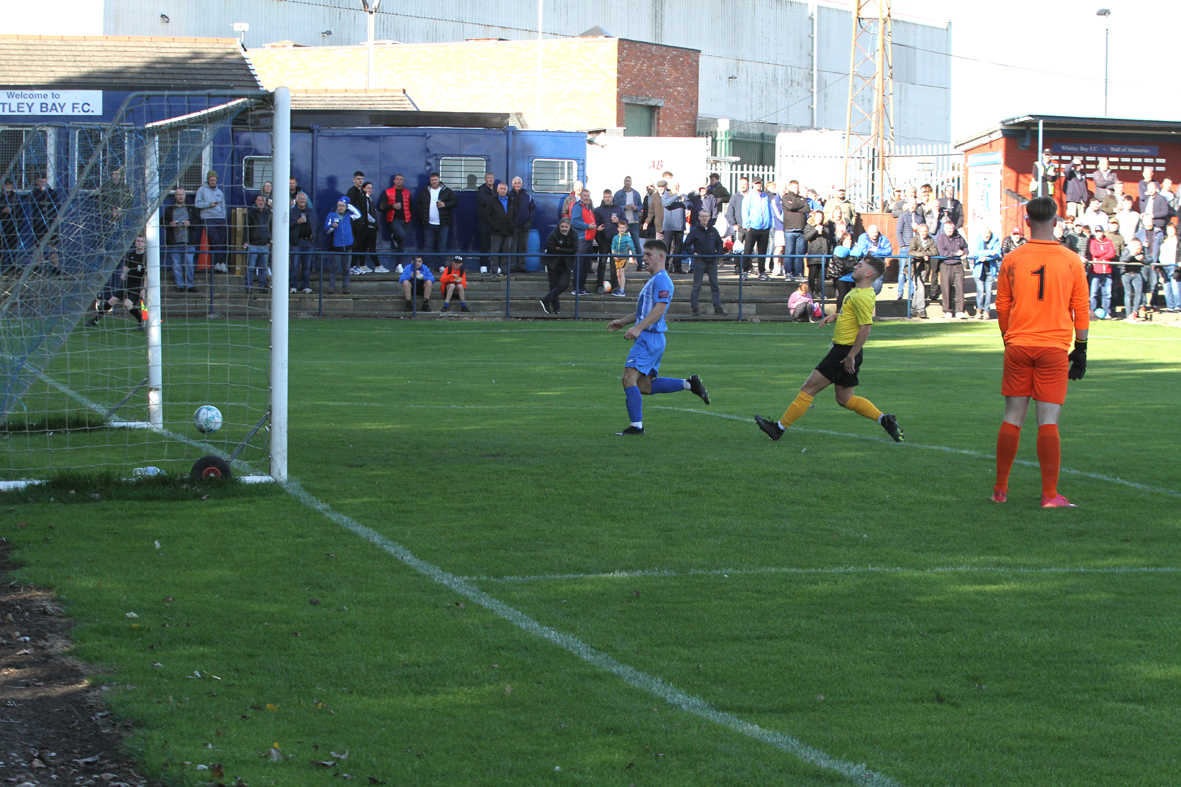 In a blistering start to this Isuzu FA Vase tie, Whitley scored twice in the first five minutes to put them on the way to a convincing victory. Their Northern League Second Division opponents Ryton & Crawcrook looked shell shocked but to their credit they never gave up. However when Whitley scored a third on the stroke of half time, the game was effectively won.

Goalkeeper Dan Lister was making his 100th appearance for the club and ahead of kick off there was a presentation to mark this achievement.

When the game got underway Whitley wasted no time in establishing their authority and inside the third minute, Bailey Geliher raced away down the right and when he crossed low into the goalmouth, Luke Porritt got ahead of his marker and stooped to send a glancing header into the far corner of the net.

The cheering had barely died down when Whitley set up another attack down the right. Harvey Neary played the ball out to Sam Irons who like Geliher moments earlier, played the ball into the six yard box. It eluded Porritt but Elliott Day pounced to fire the ball into the net to put Whitley two goals ahead. Remarkably for a defender, it was Day’s fourth goal in consecutive games and put his side in command.

The attacking start continued and with nine minutes played, Geliher made a great run into the heart of the Ryton defence but Porritt could not get his shot on target and the ball flew well wide.  Geliher was in the thick of the action and four minutes later got a shot on target but keeper Sam Harrison got his body behind the ball and made the save. Cameron Brewis was next to try his luck but Harrison pushed his effort away.

Michael Hall’s header from a Richardson corner was not far wide then Brewis forced a fine save with a header after Neary had set up the opportunity.

An in-swinging corner from Richardson nearly caught the visitors by surprise when it clipped the top of the bar then three minutes later Day’s deflected shot rattled the outside of the post with Harrison beaten.

All the pressure was coming from Whitley and after good work from Sean Taylor, Porritt fired narrowly wide.

Eventually, Ryton broke away downfield with Roper briefly threatening but Whitley regained possession on the edge of their box and went back on the attack. The frame of the goal came to Ryton’s rescue for a third time when Neary crashed a 25 yard drive off the post, but after withstanding the prolonged period of pressure, the visitors worked their way into the game and five minutes before the interval Lister was called into action for virtually the first time and it took an excellent save to deny Ryton as he pushed a close range shot high over the bar. He then got his fingertips to the corner that followed, pushing the ball away from goal.

It was a reminder, if one was needed, that the game was not yet won but any nerves among the Bay fans were eased with almost the last kick of the half when Porritt’s ball into the six yard box was poked home by Geliher to put Whitley three goals ahead at the interval.

Perhaps the goal of the game came three minutes after the restart, an excellent flowing move of one touch football that cut apart the Ryton defence, starting with Richardson’s through ball to Neary who in turn passed to Brewis who unselfishly squared it for Geliher to slot home from inside the six yard box, to put Whitley 4-0 up.

A moment of carelessness shortly before the hour mark saw Whitley give away possession inside their own half on the Ryton left and Joe Thompson capitalised as he raced away and slotted the ball beyond Lister into the far corner of the net.

The goal was not enough to alter the course of the game as Whitley comfortably saw out the final half hour with Richardson and Taylor both going close to extending the lead.

The season’s best crowd of 462 fans had been treated to an entertaining cup tie and will doubtless be hoping it marks the start of another successful run in the FA Vase.