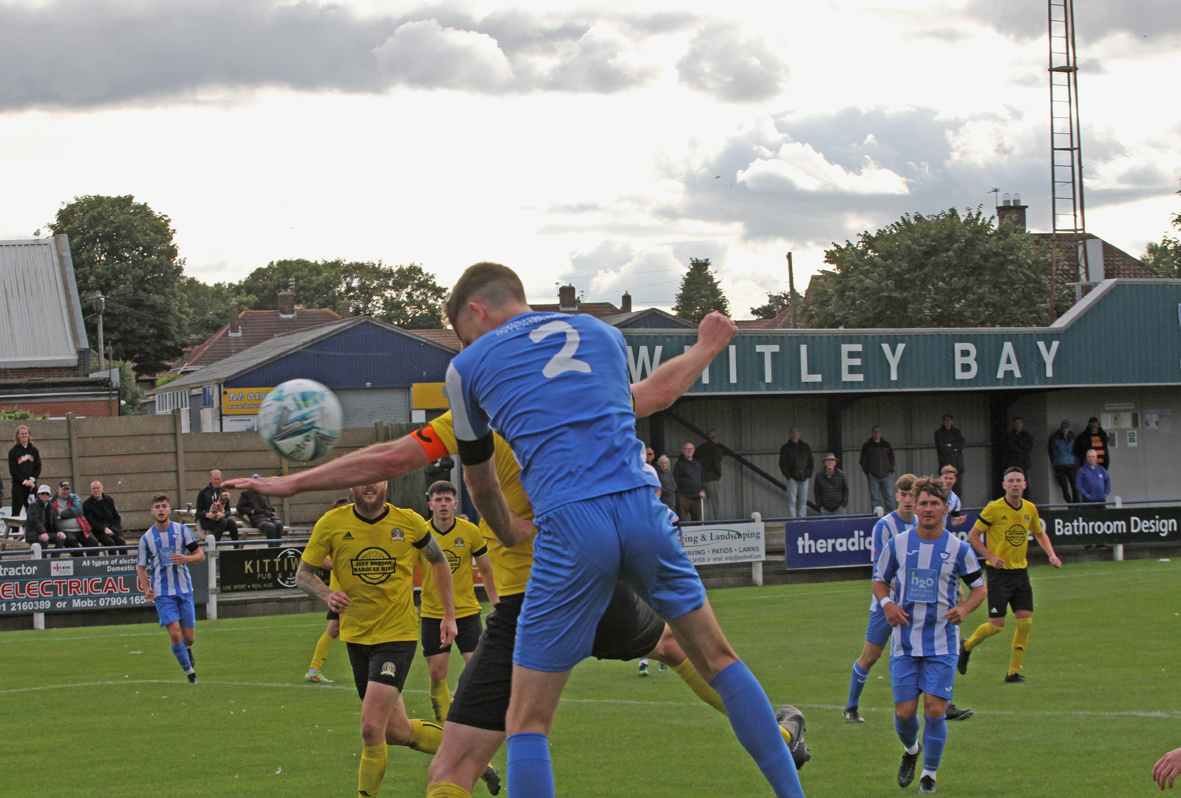 Whitley’s excellent start to the season continued with a convincing victory over notoriously tough opponents West Auckland. Their eighth win out of ten games keeps them at the top of the Northern League First Division table, one point clear of their visitors’ near neighbours Bishop Auckland.

Ahead of kick off there was an impeccably observed one minute silence as a mark of respect following the death of Her Majesty Queen Elizabeth II.

Looking lively from the outset, Whitley were forcing the visitors back on the defensive and with eleven minutes played, they won a penalty when Josh Gilchrist’s ball into the box from the left was handled by Danni Lay. The centre back vociferously protested his innocence and was perhaps fortunate to escape further punishment but when calm was restored, Harvey Neary beat keeper Matthew Wilkinson with a spot kick into the bottom corner of the net.

Whitley looked to build on their early lead and within three minutes Lewis Orrell brought a good save from Wilkinson. A dangerous cross from Neary was then put behind for a corner and as the pressure continued, the visitors were grateful when Lay headed the ball back into the keeper’s arms to give them a brief respite. With 25 minutes played, Elliott Day’s cross saw Neary’s attempt on goal parried behind for another corner. Two minutes later, teenager Bailey Geliher, making his first appearance of the season, tried his luck with a shot through a crowded defence but Wilkinson made the save.

In a break upfield West Auckland should have drawn level when a ball played in from the right flew across the six yard box and was inexplicably bundled wide of the back post. Shortly afterwards, Dan Lister was forced into a rare save as he pushed a swerving long range shot from James Ellis round the post.

Back came Whitley and Adam Hutchinson was not far off target with a first time effort after a free kick was not properly cleared by the visitors. A corner from Ben Richardson was then headed out of the ground by a defender with Michael Hall heading the follow up flag kick wide of the target.

Whitley had created enough chances to have put the result beyond doubt in an entertaining first half but at the interval they only had a single goal to show for their efforts.

As the officials emerged for the start of the second half there was an incident which resulted in West Auckland manager Gary Forrest being shown a red card and sent from the dugout.

When the game got underway, the visitors were much more positive in their approach and within 90 seconds Lister made a good save from a free kick by Ellis. Four minutes later a free kick at the other end so nearly brought a second goal for Whitley as Richardson curled his effort round the wall and the ball crashed off the post with Wilkinson beaten. Despite having more of the game than in the first half, frustration with their inability to break down a resolute and well organised Bay defence resulted in several cautions for the visitors as their tackling became excessively physical.

On the hour, Wilkinson kept his side in the game saving bravely with his feet. The strength of Whitley’s bench was evident as they made several substitutions, introducing players of the calibre of Sean Taylor and Adam Shanks as well as youngster Sam Irons who was returning from injury. In addition, new signing Cameron Brewis was brought on for his debut and it was he who set up Whitley’s second goal. With the game entering the last ten minutes, Stephen Turnbull played a free kick short and Brewis floated the ball towards the back post where Scott Lowery rose above Brown to head home.

Three minutes later Irons raced away down the right flank and when he played a low ball to the edge of the 18 yard box Elliott Day raced in to strike the ball perfectly and it flew into the net beyond a bemused West Auckland defence giving Wilkinson no chance.

The three goals were no more than Whitley deserved and indeed there could have been few complaints from the visitors if the margin of victory had been greater.

A big plus was keeping a fourth clean sheet in six games, the only goals conceded in that time having been from the penalty spot.

The blend of experience and youth that Nick Gray and Liam McIvor are developing is producing enjoyable and thoroughly entertaining football for the home fans who gave their side and management team a rousing reception at the final whistle.

Man of the match: Scott Lowery