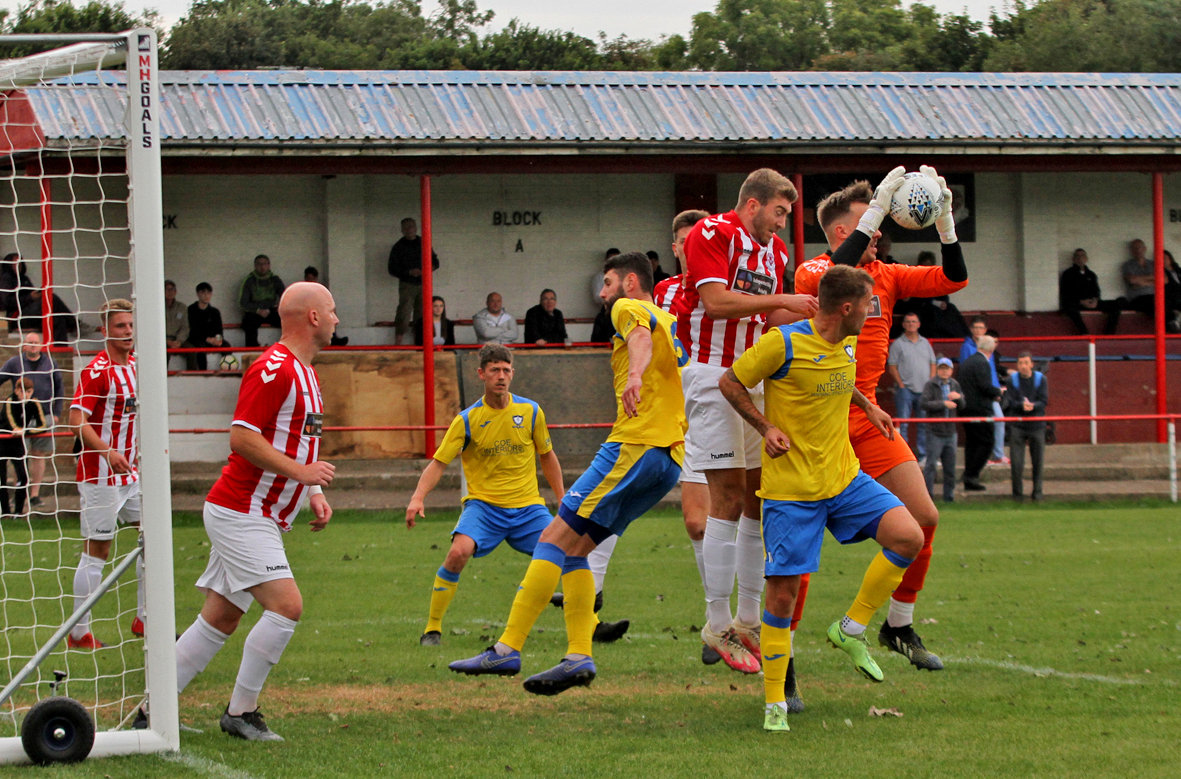 Whitley’s first game with Derek Forrest in sole charge as manager ended in defeat after a disappointing second half performance at Seaham.

After conceding an early goal, Whitley fought back strongly scoring twice in three minutes only for Seaham to hit back quickly with an equaliser to leave the game evenly balanced at the interval. The second half belonged largely to the hosts who regained the lead after an hour before a last minute penalty put the result beyond doubt.

Whitley made two enforced changes to the side that beat Billingham Town last weekend; Scott Lowery and Henry Dorward were both unavailable so Ben Gaffney and Gavin Dick came into the starting eleven.

The home side took a seventh minute lead when Adam Lennox raced into the box unchallenged from the right and his low shot went in off the far post. Bay captain Craig McFarlane then tried his luck with a shot from distance that flew over the bar but Seaham were looking the more dangerous side and a 20th minute shot flew narrowly wide.

Battling their way back into the game, Whitley began to test the home defence and Jamie Dunn brought a save from ex-Bay keeper Andy Jennison with a powerful effort. Five minutes later McFarlane latched on to an overhead kick from Adam Shanks but his shot was scrambled clear. Whitley’s increasing pressure paid off on the half hour after Mitchell Ramsay’s shot was blocked at point blank range by Jennison. The ball ran loose and Richard Coulson drilled it home to level the score.

Almost from the restart, Whitley pushed forward again and Shanks was unlucky to see his lob shot just clear the bar. Two minutes later McFarlane played an excellent crossfield ball to the right wing where Coulson took it close to the by-line before playing it into the goalmouth where Shanks leapt to head home from close range. In the space of three minutes, Whitley had turned the game on its head but a lack of concentration after the game restarted proved costly with Seaham drawing level within a minute, Lennox producing a clinical finish that gave Bannon no chance.

It was a real end to end game now and when Ramsay controlled a ball played over the top near the halfway line, he raced clear on goal but was denied by a fine save from Jennison. It was the same story just before the interval as Jennison again kept his side level with a great save to block a close range shot from Ramsay.

Whitley had created enough chances in the first half to have won the game and they began the second period in similar fashion, with Shanks seeing a goalbound effort fingertipped over the bar. Seven minutes into the half, Matty Weirs was the next Bay player to be thwarted by Jennison , who then made a low save from Shanks.

From that point on, Whitley faded and in the 62nd minute, Seaham regained the lead after a spell of pressure when the ball was played out to Sayer on the left of the box and he drove a low shot across Bannon into the far corner of the net.

The hosts were now content to pack midfield and hold onto their lead, which they did effectively despite Whitley making all three substitutions in a bid to rescue the game.

There was still the chance of an equaliser but Bay hopes were finally extinguished in the 90th minute when a mistake by Dunn resulted in a penalty which Lennox converted to complete his hat trick.

Thirteen goals conceded in the last four games clearly show where Whitley’s problems lie and improvements in defence must be a priority in the coming weeks.