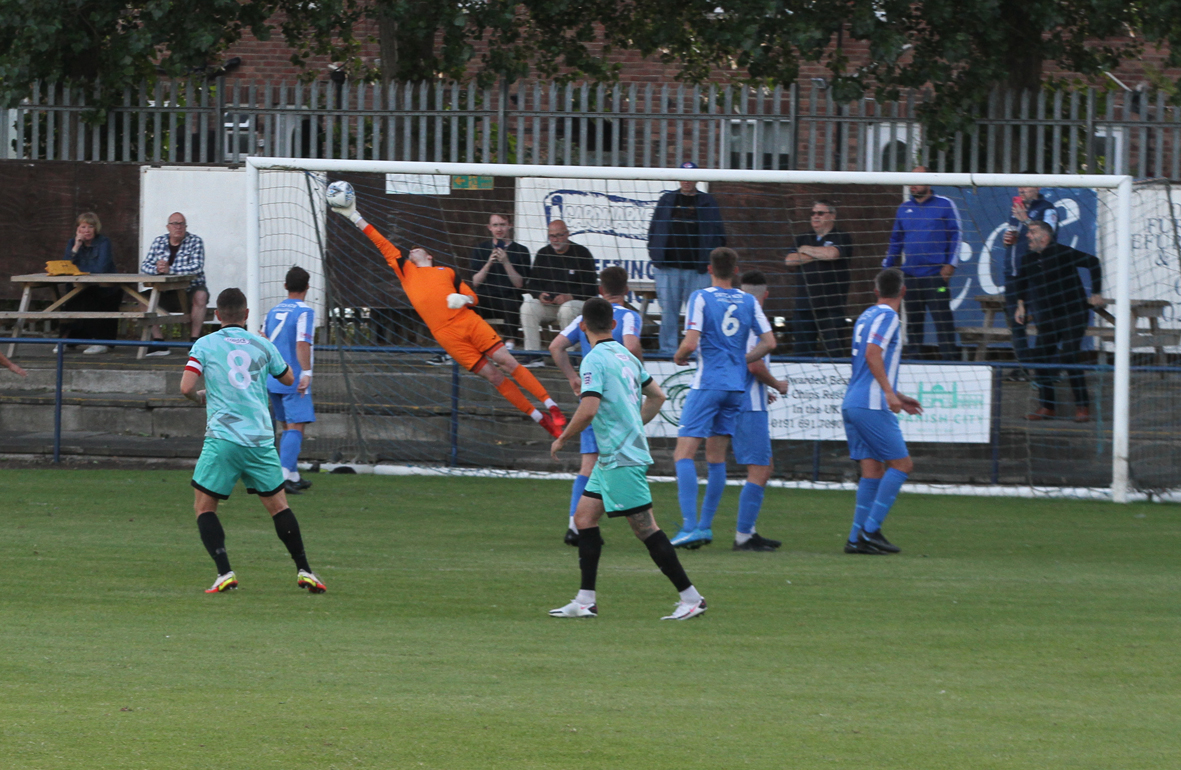 Ten man Whitley conceded three goals in the final 15 minutes as they suffered a heavy defeat at the hands of an impressive Bishop Auckland side. While the final score line may have been harsh, it was, as assistant manager Liam McIvor admitted, a reality check after Saturday’s victory over Penrith.

This was a night when Whitley were second best in virtually all departments, creating very few scoring opportunities with visiting keeper Daniel Dixon rarely tested.

The early stages looked promising for the home side and in the seventh minute Lewis Orrell’s shot from the edge of the box was heading for the bottom corner of the net until Dixon dived to push the ball round the post. That was about as tough as it got for the Bishops’ keeper although Morien’s header five minutes later flew not far wide of the upright.

Gradually the visitors worked their way into the game with their best moves coming down the right flank. When play was inexplicably allowed to continue with an Auckland player clearly at least a yard offside, it took a goal line clearance to keep the ball out. Three minutes later Louis Johnson fired high over the bar when well placed.

The warning signs were there and it came as no real surprise when Bishops took the lead after 34 minutes, with Johnson slotting home a right wing cross at the near post.

Six minutes later it took some excellent defending to prevent a second goal for the visitors. A free kick from Gott appeared to be heading for the top corner but Lister made a superb save, pushing the ball on to the post at full stretch with Sean Taylor clearing the rebound off the line.

The second half began in the same vein, with Bishop Auckland creating several chances while Whitley struggled to retain possession and could not find a way through a strong and resilient defence.

A crucial point in the game came with 64 minutes played, when the visitors broke quickly upfield and Elliott Day was penalised for a foul just outside the box. After consulting his assistant, referee Matthew Cain showed Day a red card and awarded a free kick which was taken by former Bay midfielder James Fairley, whose effort was cleared off the line by Taylor.

The crowd showed their frustration at several contentious decisions that went the way of the visitors but despite being a man down, Whitley were still in the game until the 76th minute when the dangerous Johnson prodded home another cross from the right.

Two minutes later, as Whitley mounted an attack, Luke Porritt went down in obvious pain next to the by-line but play was allowed to continue and switched to the other end. To his credit, Bishops’ keeper Dixon shouted to the referee to stop the game and allow treatment for Porritt who was eventually helped off the pitch, unable to continue. Adam Shanks, recovering from injury, came off the bench for the final ten minutes but was unable to make a significant impact and two minutes from time any lingering Bay hopes were extinguished when Risbrough broke clear and slotted the ball home, giving Lister no chance.

The fourth goal came in the last minute, a tremendous volley by Whitfield past a now dispirited home defence.