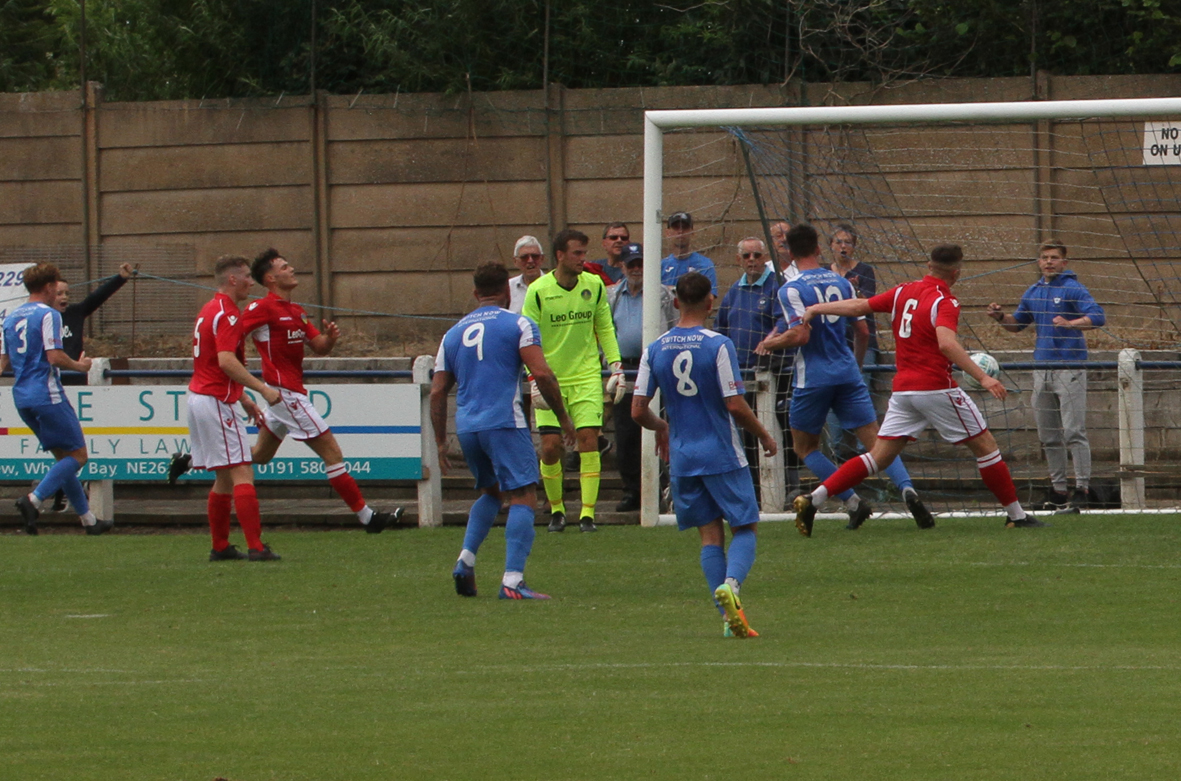 Whitley got their season off to a winning start with a well deserved victory over Penrith on a warm afternoon at Hillheads.

Despite the very dry weather the pitch was in immaculate condition after its summer maintenance as Whitley welcomed six debutants following Nick Gray’s overhaul of his squad during the close season. Inevitably at this time of year, with the earliest ever start to the Northern League season and the school holidays just underway, several players were unavailable due to holiday commitments.

Penrith almost took the lead inside two minutes following a foul on Armstrong just outside the Whitley box. The Penrith midfielder struck the free kick himself and the ball took a deflection off a defender and hit the post before rebounding away from goal. Whitley quickly responded with Luke Porritt breaking away down the left but his cross went behind for a goal kick. A few minutes later Scott Lowery headed just wide from a Josh Gilchrist corner and with Whitley continuing to have the upper hand, Malcolm Morien’s header sent Porritt away and although he rounded keeper Aaron Taylor, he was denied as Liam Delaney got back to clear almost off the line.

With 20 minutes played, Lowery again went close, leaping above the Cumbrians’ defence to head inches wide from a free kick by Gilchrist. Another Bay attack ended with Morien sending a header over the bar as they sought to break the deadlock.

In the 32nd minute, the visitors created just their second chance of the game, Gary Richardson breaking through only for Dan Lister to make a fine diving save at the foot of the post.

Whitley were looking the better side and got the goal they merited seven minutes before the interval, when the impressive Elliott Day won possession on the left from a Penrith defender and crossed low into the goalmouth where fellow debutant Harvey Neary had a simple tap in from close range.

A goal up at the interval, Whitley began the second half seeking to press home their advantage. Within 60 seconds Taylor pushed a shot from Gilchrist round the post and two minutes later Neary burst through but the Penrith keeper again kept the ball out, this time with his feet.

After a poor challenge on Lowery by Connor Shields, the Penrith striker was lucky to escape a caution, with play being held up while the Bay captain received treatment.

On the hour mark, Dan Wilds, signed during the week, replaced Adam Hutchinson who had suffered a hamstring injury. Gilchrist was harshly booked for a trip but then Porritt was held back as he tried to break free from two defenders and play was allowed to continue.

With only one goal separating the sides, Penrith were still very much in the game, despite creating few chances. Whitley continued to push forward but Morien was caught offside when played through by Porritt.

With the game entering stoppage time, Penrith pushed upfield and a ball to the back post was headed goalwards at close range by Richardson but Lister made a tremendous save, leaping to palm the ball over the bar. It was crucial save by the Bay keeper which kept his side in front. Two minutes later, the victory was sealed when teenage defender Sam Irons made a great run down the right before crossing into the box where Morien crashed the ball between the keeper and his near post. There was barely time to restart the game before the final whistle was blown.

It had not been easy and Penrith had battled away well but there could be no doubt that Whitley were worthy winners.