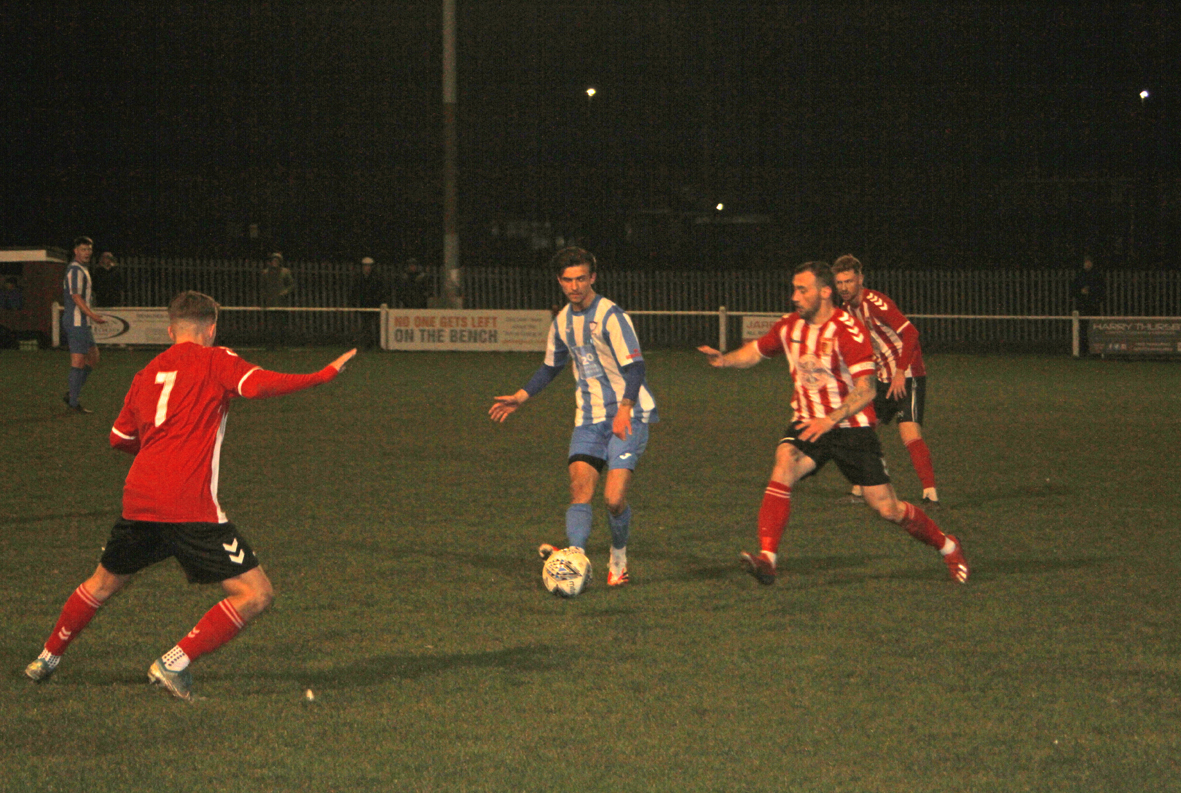 Whitley are through to the last eight of the Northern League First Division Cup after a dramatic penalty shoot out victory at Sunderland RCA. This new competition was introduced for this season in place of the League Cup and manager Nick Gray took the opportunity to hand a debut to goalkeeper Isaac Libotte. The teenager gave a good account of himself and played a crucial role, saving the home side’s third penalty. Also making his full debut was midfielder Jake Jensen who made a valuable contribution by scoring from the spot.

The home side had the better of the opening stages and inside the first 15 minutes spurned two glorious opportunities to take the lead. With ten minutes played, former Bay midfielder Matty Weirs was played through on the right but drove his shot straight at Libotte then three minutes later a rapid break upfield from a Bay corner put Callum Guy clear on the left of the box but he too fired straight at the keeper who made a comfortable save.

Midway through the half Whitley came more into the game and after Gavin Dick’s cross from the right was just too high for the onrushing Tom Smith, Luke Taylor’s powerful shot was pushed over the bar by RCA keeper Keaton Marrs. From the resultant corner, Scott Lowery’s header was just too high.

When the home side pushed forward, they found the Bay defence much more resilient than when the sides had met back in November. On the counter, Tom Smith sent a shot just wide of the post but when Jensen played a good ball across goal five minutes before the interval, Josh Gilchrist blazed his shot high over the bar and out of the ground. A foul by Callum Anderson just outside the Whitley box gave the hosts an opportunity but they failed to capitalise then on the stroke of half time, Gilchrist’s cleanly struck shot from the right of the RCA box was saved by Marrs to leave the sides level at the break.

Whitley began the second half in positive fashion with Mitchell Ramsay, back in the side following suspension, looking lively and pressurising the home defence. Three minutes after the restart, Ramsay raced away up the left then drilled a low cross into the goalmouth where RCA skipper Daniel Hawkins stuck out a foot to try and block the cross but inadvertently diverted the ball into his own net to put Whitley in front.

Five minutes later Whitley might have doubled their lead when the ball was played into the home goalmouth and rebounded off several players as shots were repelled by an anxious home defence.

Luke Taylor was a key figure in the Whitley defence when RCA played hopeful balls into box, winning challenges in the air and limiting scoring opportunities. Meanwhile the greater threat was coming at the top end of the pitch where Whitley created further chances to settle the tie. With 71 minutes played, Marrs made a fine save to keep out a powerfully struck effort from Ramsay and Whitley kept up the pressure bringing on Kevin Mirzakhanian in place of Malcolm Morien in the final 15 minutes.

The home side threw players forward in the closing stages and with seven minutes remaining, they drew level through the efforts of two of their four ex-Bay players. Michael Annang-Colqhuoun played the ball into the box from out near the right by-line and Craig Hennis flicked it beyond the reach of Libotte into the far corner of the net.

One of the most positive signs in the past two games has been Whitley’s improved strength in defence and they battled through the last few minutes relatively untroubled to take the tie to penalties.

The only slightly anxious moment of the shoot-out came with the first spot kick, when Marrs got his hands to Ben Richardson’s penalty but could not keep it out. From that point on, Whitley were faultless. Mitchell Ramsay and Gavin Dick were on target whereas with RCA’s third kick, Kieran Charlton saw his effort superbly saved low down by Libotte. Jake Jensen converted Whitley’s fourth penalty leaving 20 year old Kevin Mirzakhanian to seal a morale boosting victory with a perfectly executed fifth kick.