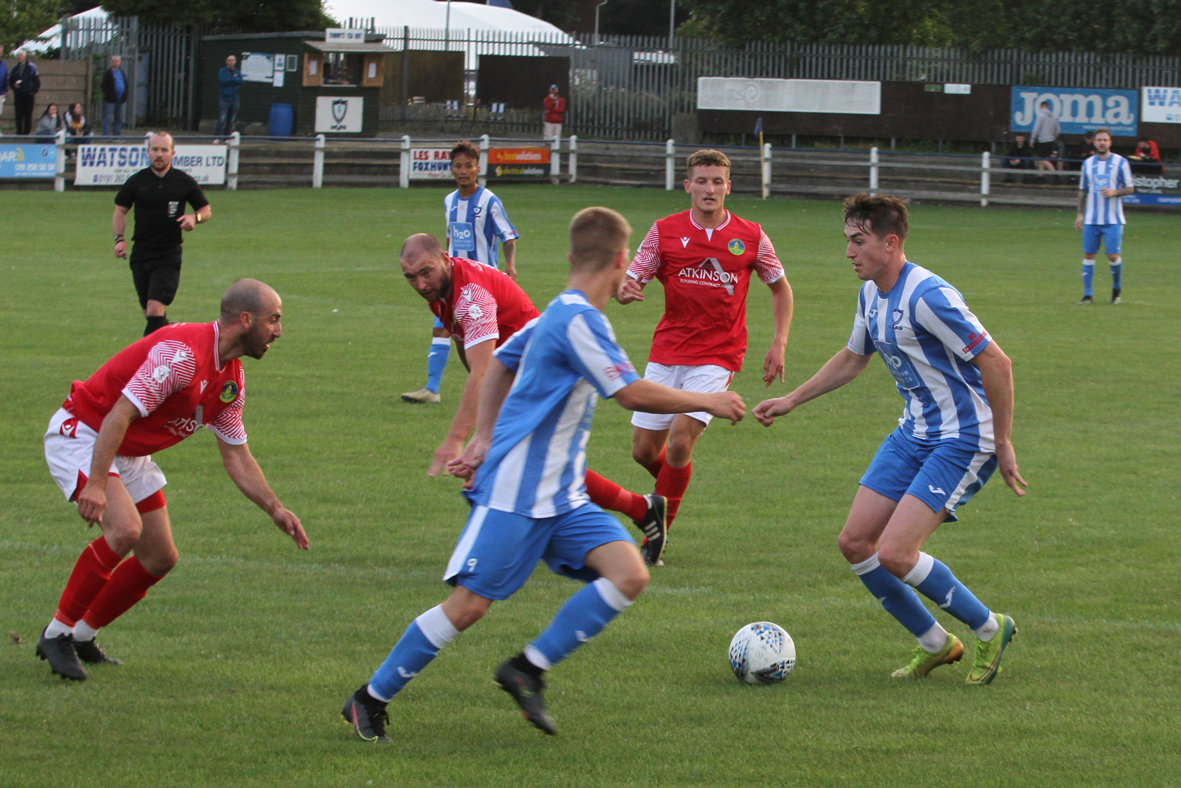 Whitley paid the price for defensive lapses as Penrith ran out deserved winners on a fine summer’s evening at Hillheads. An excellent crowd of almost 400 saw the Cumbrians build up a three goal lead by the hour mark and although Whitley battled back with two goals in the final quarter of the game, it was not enough to rescue a point.

Following their victory over Whickham at the weekend, it was an unchanged Whitley starting eleven that took to the pitch but they were soon under pressure as Penrith bossed the opening stages, looking stronger and more determined. After just ten minutes, the visitors took the lead with Kingsley Grandison capitalising on his chance after Whitley had lost possession of the ball.

Whitley were making little impression and when they won a free kick some 25 yards from goal, Craig McFarlane drove the ball just wide of the target. Penrith responded with Adam Main getting in a shot which was too high to trouble Dan Lister in the Bay goal.

Whitley’s best chance of the half came in the 27th minute when Penrith skipper Grant Davidson made a crucial goal line clearance after good work by Jon Weirs. Three minutes later, Jamie Dunn’s long range effort left keeper Ashley Green rooted to the spot as it flew inches wide of the far post. Whitley were enjoying a good spell of pressure but could not capitalise on their chances and barely 60 seconds later, Joe Malone’s shot went just the wrong side of the post.

Five minutes before the interval Richard Coulson worked his way across the box before driving a shot goalwards only for Green to block his attempt. Matty Weirs then chipped the ball just over the bar with Green off his line.

Penrith were leading at the interval but with just one goal in it, there was still everything to play for.

After the break, Whitley started in lively fashion pushing the visitors back in defence but the Cumbrian back line was holding firm, unlike the Bay rearguard, who were looking much less confident than at the weekend, conceding possession in dangerous situations. Nine minutes into the half, a back pass with insufficient power was seized on by the visitors and Bryse Dean-Norman got the finishing touch as Lister was left helpless.

If that was bad for Whitley, the home fans were stunned six minutes later when Craig McFarlane, under pressure from Grandison, attempted to play the ball back to Lister from near the right corner flag but once again the ball was intercepted and played across the face of goal for Connor Shields to slot home from close range.

With a three goal lead, Penrith looked in complete control but in the 67th minute, Hishi Lama gave Whitley hope as he slotted the ball beyond the reach of Green just inside the near post. It was his first goal in Bay colours but it seemed to be no more than a consolation effort and little cause for celebration. However, that might have changed if substitute Adam Shanks had managed to get a stronger touch on a free kick whipped into the box, but his effort slid past the post.

Richard Coulson, later named Whitley’s man of the match drilled a shot just wide before Jason Chanayire got Whitley’s second goal just as the game was entering stoppage time. Unfortunately from a Bay point of view, it had come too late to affect the outcome of the game as Penrith held out for what was a well deserved victory.