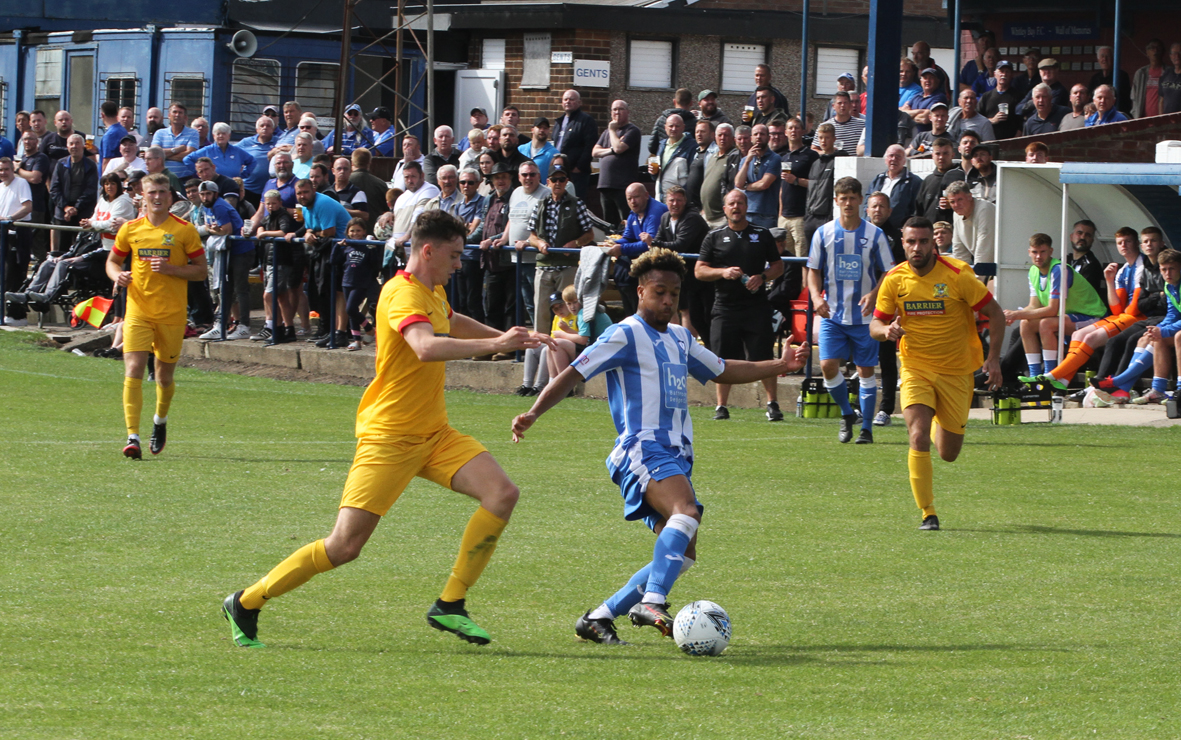 Whitley followed up their impressive cup win in midweek with another well deserved victory as they overcame local rivals Newcastle Benfield on a sunny afternoon at Hillheads. Club captain Craig McFarlane returned to the side in place of the injured Callum Anderson and Henry Dorward was unavailable so Matty Weirs returned to the starting eleven.

Ahead of kick off, there was a presentation to Adam Shanks to mark his 100th appearance for the club last week.

After a quiet opening, the game burst to life in the ninth minute when Whitley were penalised for a foul on the Benfield right, some 25 yards from goal. Reece Noble’s free kick to the back post was fumbled by Chris Bannon and the ball fell for Benfield skipper Mark Turnbull to prod home from close range.

Whitley responded quickly to this error and just three minutes later, Shanks curled a great shot from the left edge of the box beyond the dive of keeper Andrew Grainger who could only watch as the ball clipped the outside of the post and went out of play. Shortly afterwards there was a delay when prolific Benfield striker Dennis Knight received treatment for an injury but was unable to continue, clearly a blow for The Lions.

Despite this setback, the visitors continued to press forward but two attempts on goal both drifted wide of the target.

Whitley were very much back in the game after 32 minutes when a right wing corner caused confusion in the Benfield defence and Turnbull put the ball in his own net to earn the dubious distinction of scoring at both ends. Two minutes later Whitley were in front when Jason Chanayire lobbed the ball over the advancing Grainger for his fourth goal of the season.

Steadily growing in confidence, Whitley had the better of the closing stages of the half and retained their narrow advantage at the interval.

Two minutes after the resumption, Shanks might have got on the score sheet but his diving header was blocked at close range by the alert Grainger.

Benfield had been a free scoring side in the opening games of the season but were struggling to break down a well organised Bay defence which dealt effectively with a free kick just outside the box ten minutes into the half. Not long after, Luke Taylor went on a surging run from inside his own half and threatened to break clear on goal but his shot from 20 yards was blocked.  An effort midway through the half from Shanks was parried by Grainger as Whitley searched for a third goal that would probably have put the game beyond the visitors.

Just over ten minutes from time The Lions brought on veteran striker Paul Brayson, who has so often been a thorn in the side of opposing defences, but on this occasion he was not able to make an impact and it was Whitley who might have made the points safe with five minutes remaining when great attacking play put the hard working Chanayire clear on goal but he could not make clean contact with the ball and scooped his shot over the bar from four yards out.

Whitley played out the remaining minutes confidently, retaining possession and denying Benfield any chance of grabbing a late equaliser and the excellent crowd in excess of 500 fans were soon celebrating a hard fought but thoroughly deserved victory.