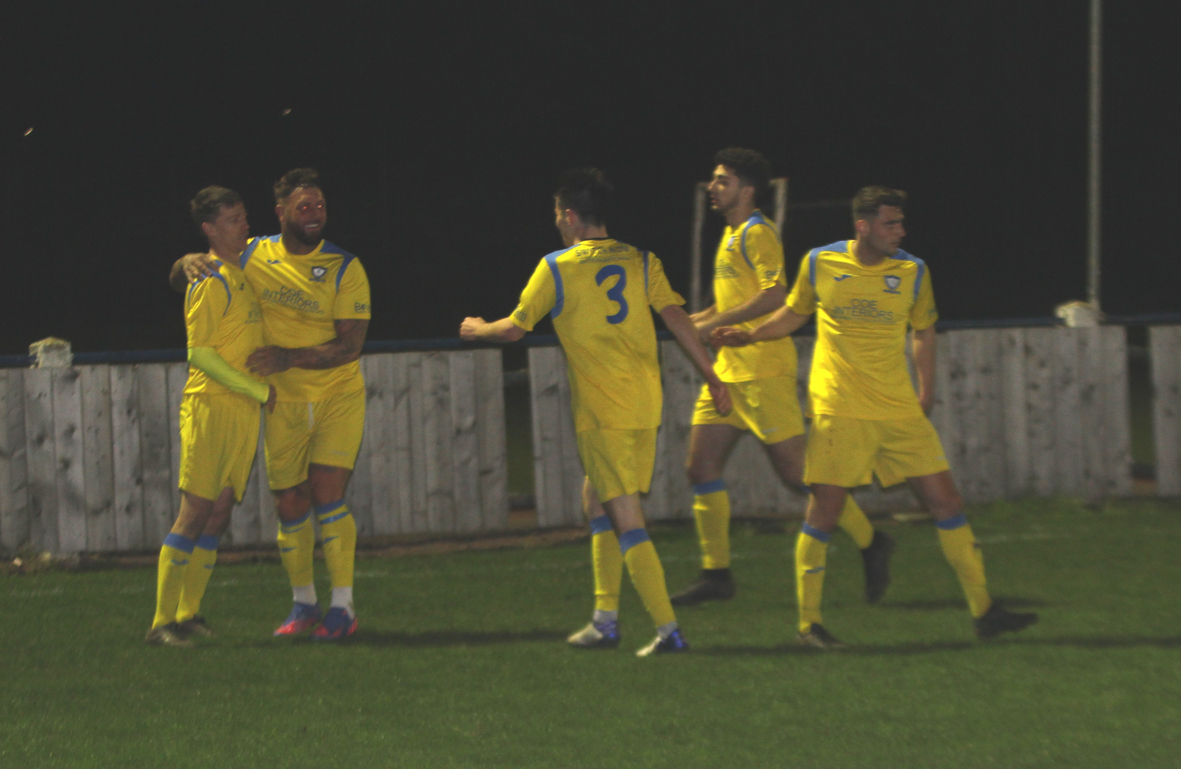 The old cliché ‘a game of two halves’ was a fair summary of this game on Teesside when Whitley battled back from two goals down to earn a valuable point.  With both sides in need of the victory, Billingham will feel they let slip the chance of climbing off the foot of the table and with the points shared, Whitley remain 11 points ahead of Town and are edging to safety with just five games remaining.

Among several changes to the side that won on penalties in last week’s First Division Cup tie at Sunderland RCA, Bay manager Nick Gray handed debuts to Reece Havelock-Brown and Zack Bewley.

Billingham started much the better of the two sides and immediately went on the attack, unsettling a Bay defence that had looked much more secure in the previous two games. In Whitley’s first attack, Bewley raced away down the left wing and fired a shot only just wide of the near post. Six minutes later, Mitchell Ramsay swivelled on the ball inside the Town box and drove a first time shot straight at keeper Jack Norton.

However, these were rare moments of promise for Whitley during a wretched first half when they seemed to be slipping back into error strewn ways. One such mistake proved costly in the 23rd minute when a ball across the 18 yard box was completely missed by a defender’s attempted clearance and the hosts capitalised with Danny Boyle left clear on goal. Dan Lister got a hand to Boyle’s shot but had no chance of keeping it out.

Growing in confidence, Billingham kept up the pressure with much of the game being played in the Bay half. Things went from bad to worse for Whitley shortly before the interval when Gavin Dick was penalised for a foul in the box and Harry Close sent Lister the wrong way from the penalty spot to give the hosts a two goal advantage and put them seemingly well on the way to victory.

The goal sparked Whitley into life and within 60 seconds, Malcolm Morien forced Norton to make a fine save with his foot. Then on the stroke of half time, Morien again burst through on the left and drilled a powerful shot across Norton and just inside the far post. It was a crucial goal and gave Whitley a much needed lifeline.

They began the second half in far better fashion, pressing forward from the whistle and within four minutes, captain Scott Lowery saw a header pushed away by Norton. Morien again went close before Norton palmed away Ramsay’s dangerous cross from the left. In a rare break downfield, a speculative shot by Town cleared the bar. With 20 minutes remaining, Ramsay was tripped on the edge of the box but the resulting free kick came to nothing.

The Teessiders then had Danny Earl sin-binned for ten minutes following comments made to the referee and in an attacking move, Whitley made a double substitution, bringing on Adam Shanks and Kevin Mirzakhanian in an effort to capitalise on their second half superiority. Six minutes later the move paid off as Shanks made a great run, bursting forward from midfield through the Town defence before unleashing a tremendous shot past Norton to draw the sides level.

It looked as if Whitley might now complete a similar comeback to that achieved at Redcar earlier in the season when they came from 2-0 down to win 3-2. Pressing forward, they quickly won a corner and Lowery fired over the bar from the flag kick. Town were hanging on but after withstanding several attacks, they nearly stung Whitley with just four minutes left when they broke forward and it took a great save by Lister to deny them a late winner.

In the end a draw was probably a fair result but both sides will feel that it was a game they could and should have won.