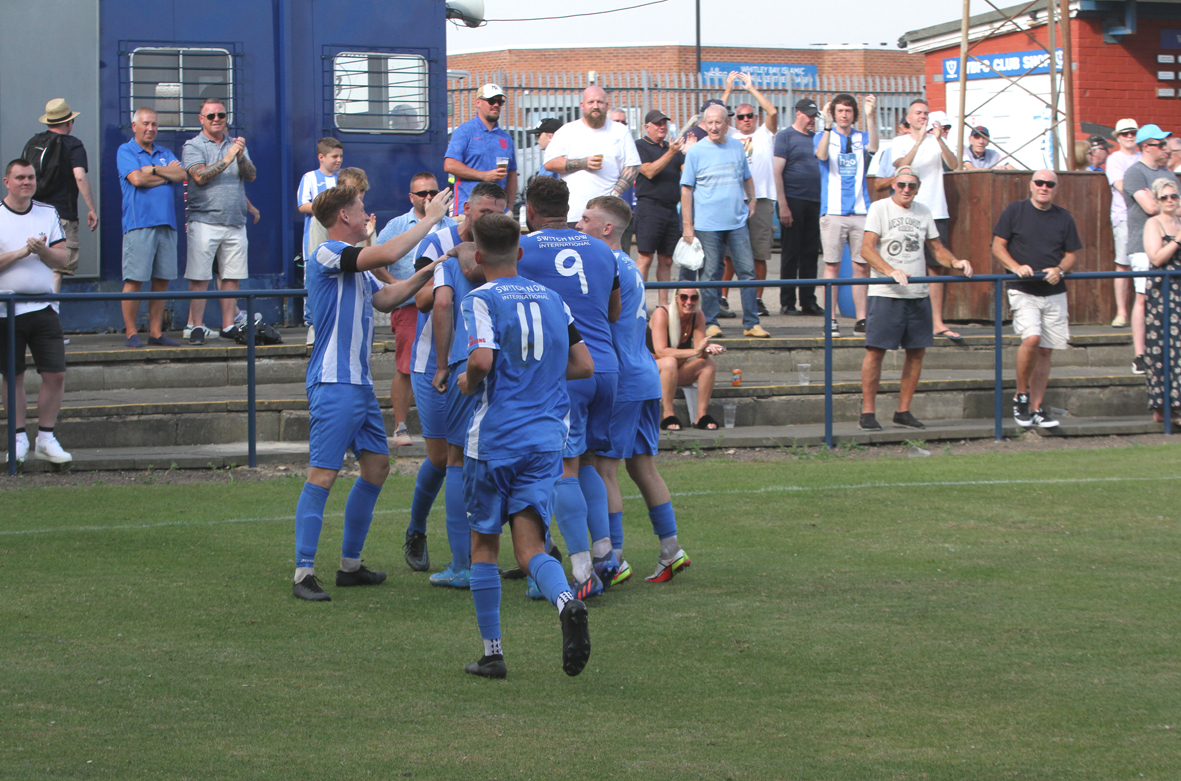 Whitley claimed their second victory in four days but visitors Redcar Athletic made them work hard for the points on a very warm, energy sapping afternoon at Hillheads.

The game was preceded by a minute of applause in memory of Dennis Gray, father of Bay manager Nick Gray who passed away at the end of July.

The visitors had an early chance when a header from Walker was just too high. There was little goalmouth incident for the next ten minutes but Redcar surprised Whitley in the 13th minute when Walker was allowed space down the left flank and when he cut in to the edge of the area he seized his chance with a low shot across Lister into the far bottom corner of the net to give the Teessiders the lead. Seven minutes later they had another attempt on goal but Woodhouse fired straight at Lister who saved comfortably.

Whitley fought back and drew level in fine style at the mid-point of the half. The goal came when Luke Porritt cut the ball back from near the left by-line to Elliott Day who from the edge of the box delivered a stunning shot that looped over keeper Matthew Bateman and dipped just under the bar.

Barely a minute later Oliver Cresdee had a chance on goal but his effort was saved, at the expense of a corner. Play was then halted briefly for the first of two drinks breaks.

On the resumption, Scott Lowery headed narrowly too high from a corner but two minutes later he was involved in a crucial incident, as he was tripped inside the box when going for a free kick. Referee David Carr had no hesitation in awarding a penalty and Malcolm Morien sent Bateman the wrong way from the spot to turn the game around and put Whitley in front.

Porritt was causing problems for the Redcar defence and six minutes before half time he burst clear down the left but his ball into the goalmouth just cleared the bar.

Three minutes later Redcar broke downfield but although the ball ended in the net, an offside flag had been raised and play was brought back for a Whitley free kick some 20 yards from goal.

Deservedly ahead at the break, Whitley began the second half looking determined to extend their advantage. From another Porritt cross, Morien’s glancing header was pushed wide by Bateman then six minutes later, Richardson’s free kick caused confusion in the Redcar goalmouth and the ball was eventually put behind for a corner.

Just before the hour mark, Sam Irons made a great run down the Bay right before playing in Cresdee with a glorious chance to give Whitley a two goal cushion but his shot was inches too high. Another Bay chance came and went when Morien played the ball across goal but just too far in front of Lewis Orrell.

Irons drew applause for great defensive play when the visitors broke away down their left but the Bay youngster tracked back superbly and not only dispossessed his man but also won a throw in.

The game was developing in similar fashion to Wednesday evening, with Whitley leading 2-1 but failing to capitalise on the chances they were creating and as in midweek they were nearly made to pay when a rasping shot from substitute Clarkson crashed off the post with Lister making a good save to keep out the shot from the rebound.

Whitley continued to play attractive football and set up further opportunities, with sub Harvey Neary having a good chance only to delay his shot which was then saved.

Eight minutes from time a stinging shot from Porritt which took a slight deflection was kept out by a great save from Bateman, who got his fingers to the ball and pushed it over the bar.

Whitley’s pressure finally paid off from the corner that followed, when Porritts’s flag kick was met by Lowery who smashed the ball into the net from close range.

Leading 3-1 with seven minutes to go, the game looked to be won but teams are often at their most vulnerable after scoring and a lapse in concentration allowed Redcar to race upfield straight from the restart and Clarkson drove the ball just inside the near post to bring his side back in the game at 3-2.

Whitley managed the closing stages effectively, retaining possession inside their opponents’ half and in stoppage time might even have snatched a fourth goal but Cresdee was denied by another outstanding save from Bateman, who pushed his powerfully struck shot over the bar.

A third win in four games represents a very encouraging start to the season for Whitley and with several players to return from holidays and injuries, there is real strength in depth in the squad that Nick Gray and assistant Liam McIvor are assembling.