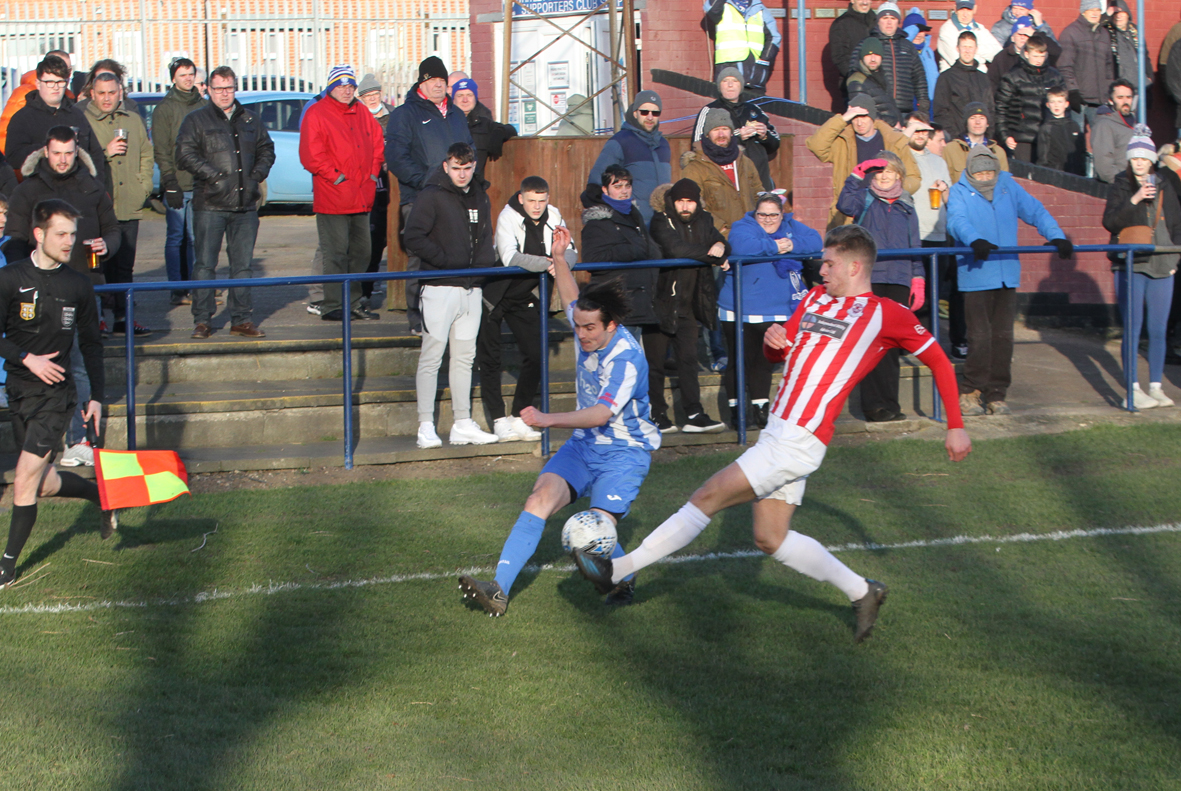 Two first half goals gave Seaham a well deserved victory on a sunny but very windy afternoon at Hillheads. Severe weather during the morning resulted in many games being called off due to storm damage and after watching a very disappointing performance, many Bay fans may have been wishing this game had been postponed as well.

It was the first home game in charge for Whitley’s new management team of Nick Gray and Stuart Brightwell and along with the excellent crowd of over 500 fans, they could have been left in little doubt that there is much to be done to turn around the team’s fortunes.

There were two changes from the side that played at Newcastle Benfield, with Scott Lowery back after suspension and Shaun Dippenaar also coming into the starting eleven.

Seaham opted to play with the strong wind at their backs in the first half and unsurprisingly, much of the play was in the Whitley half of the field. A back pass to Dan Lister nearly caused problems as he struggled to control the ball in the conditions but he raced back to clear the danger. In the 17th minute, he produced a top quality save diving to push a powerful long range shot from Joshua Baggs round the post.

Barely a minute later, Lister raced off his line towards the left edge of his box attempting to gather a bouncing ball but in doing so he caught striker Adam Lennox, conceding a penalty. Lennox stepped up to take the spot kick himself, beating the dive of Lister with a powerfully struck effort.

Ten minutes later Lennox was cautioned for a bad tackle in midfield and when play resumed, Whitley produced their first shot of the game with Matthew Coaley striking a 20 yard shot which was dipping just under the bar until former Bay keeper Andrew Jennison made a fine fingertip save, pushing the ball over the top. Two minutes later, a cross from the right by Harry Yoxall eluded everyone as it flew across the six yard box.

After this brief spell of play in the visitors half, the action switched back to the other end, and with 37 minutes played, Seaham doubled their lead thanks to an outstanding strike from Mark Robinson. The former Whitley midfielder took the ball across the edge of the Bay 18 yard box before finding space to unleash a great shot into the bottom corner beyond the reach of Lister.

Shortly before the interval Lowery was cautioned for a foul 20 yards from goal but the resulting free kick was comfortably saved by Lister.

Despite facing a two goal deficit, Whitley must have felt optimistic about getting back in the game in the second half with the elements in their favour. On the restart, Callum Anderson and debutant Jake Jensen were brought off the bench but the hoped for improvements failed to materialise. Seaham were adapting far better to the conditions, which were gradually improving as the wind eased, while Whitley made little impression in attack, with too many wayward passes. Midway through the half it took an excellent tackle by Yoxall to deny Lennox as the Seaham man raced through on goal. Then six minutes later, a misplaced pass in defence created danger until Lister made a brave save with his feet and the loose ball was then blazed high over the bar.

It took until the 74th minute for Whitley to get an attempt on target but Dippenaar’s effort which brought a point blank save from Jennison was ruled offside. Three minutes later Mirzakhanian almost broke through the Seaham defence but a last ditch tackle denied him a chance on goal.

From this point on, the game petered out with Seaham more than happy to retain their half time lead.