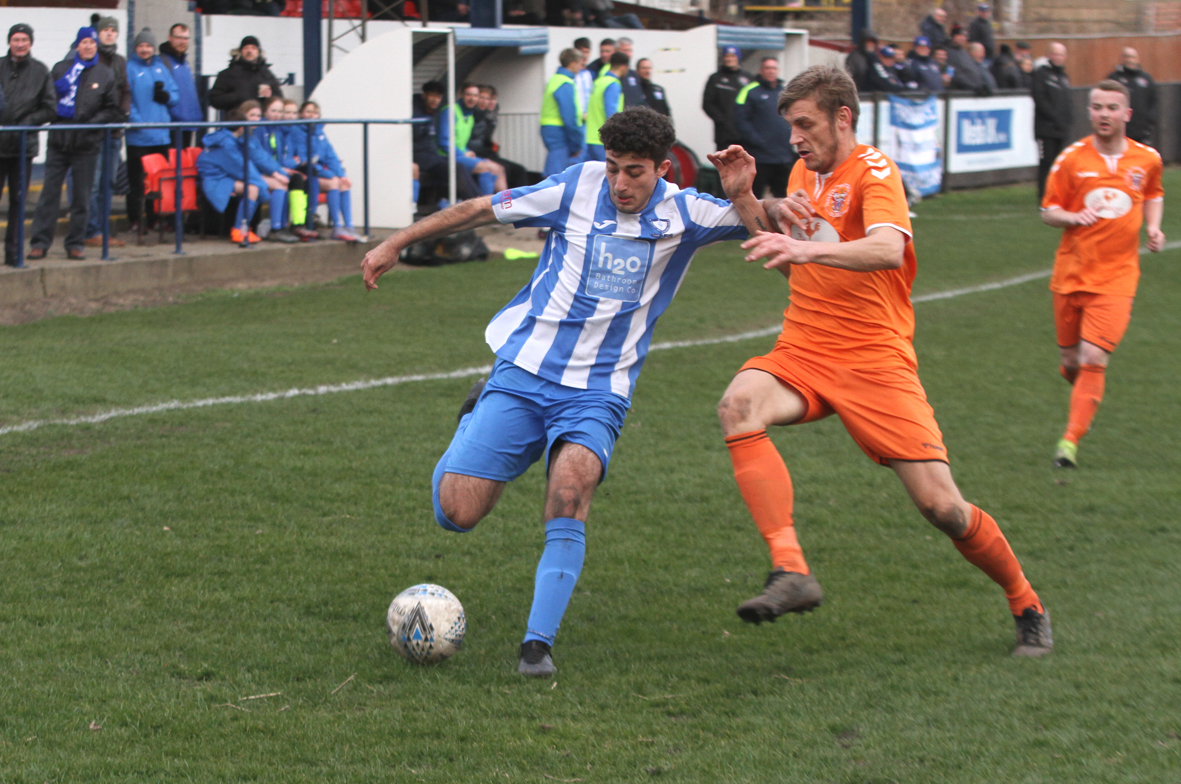 This was a battling performance by Whitley against second top Thornaby and they put a dent in the Teessiders promotion challenge, fully deserving a share of the spoils. Defensive errors have been Whitley’s downfall for much of the season but in this game they put bodies on the line, saved a penalty and kept their first clean sheet since November.

It was a rare goal less draw, their first in two and half years, but Bay fans were not complaining after seeing their side thwart one of the most prolific strike forces in the league.

In the first half, Whitley looked the better side without creating many chances but in the later stages of the game they had to withstand real pressure as the visitors poured forward in search of a winner.

In the 12th minute, Kevin Mirzakhanian broke away down the wing but his ball across goal was driven well wide of the target by Malcolm Morien. Two minutes later Lewis Orrell’s ball from the right eluded everyone as it flew across the box and was just beyond the reach of the in rushing Tom Smith at the back post. A dangerous looking Thornaby attack was halted by a well timed tackle from Gavin Dick but with 21 minutes played, referee Graeme Hopper left home fans and players bemused when he awarded a penalty to the visitors for what he deemed a foul on the right edge of the Whitley box, even though the player involved looked well offside.

However, when Elliott Beddow stepped up to take the spot kick, justice appeared to be done when Dan Lister dived to his left to make a crucial save. It was a moment that gave Whitley a real lift and they continued to pose the greater threat and enjoyed the majority of possession.

Morien had a chance to put Whitley ahead just past the half hour when he was played clear on the right but failed to find the target with his shot.

Little threat came from Thornaby until just before the interval but when they created a half chance, Hutchinson blazed his shot high over the bar and out of the ground. On the stroke of half time another effort from the Teessiders went narrowly wide.

Eight minutes into the second half, Dick broke away down the Bay right, exchanged passes with Mirzakhanian before driving his shot over the bar.

Midway through the half, Scott Lowery met Ben Richardson’s corner with a powerful header but directed it straight into the arms of Thornaby keeper Hunt. Three minutes later a fine one handed save by Hunt kept out an effort from Morien but when play switched to the other end it took a great save by Lister to push a shot from Hutchinson onto the post before the ball was cleared from danger by Lowery.

Thornaby were getting more of the ball now and into the final 15 minutes they threw extra players forward in search of the breakthrough. However, unlike in previous games, the Bay defence held firm. Determined tackling and strong clearances downfield frustrated their opponents and kept them in with a chance of snatching victory. Shanks and Mirzakhanian both created openings but the finishing touch was missing.

Late in the game Lister went down injured when going to punch clear a free kick into the box but the ball was cleared by a defender positioned on the line and the Bay keeper was able to continue.