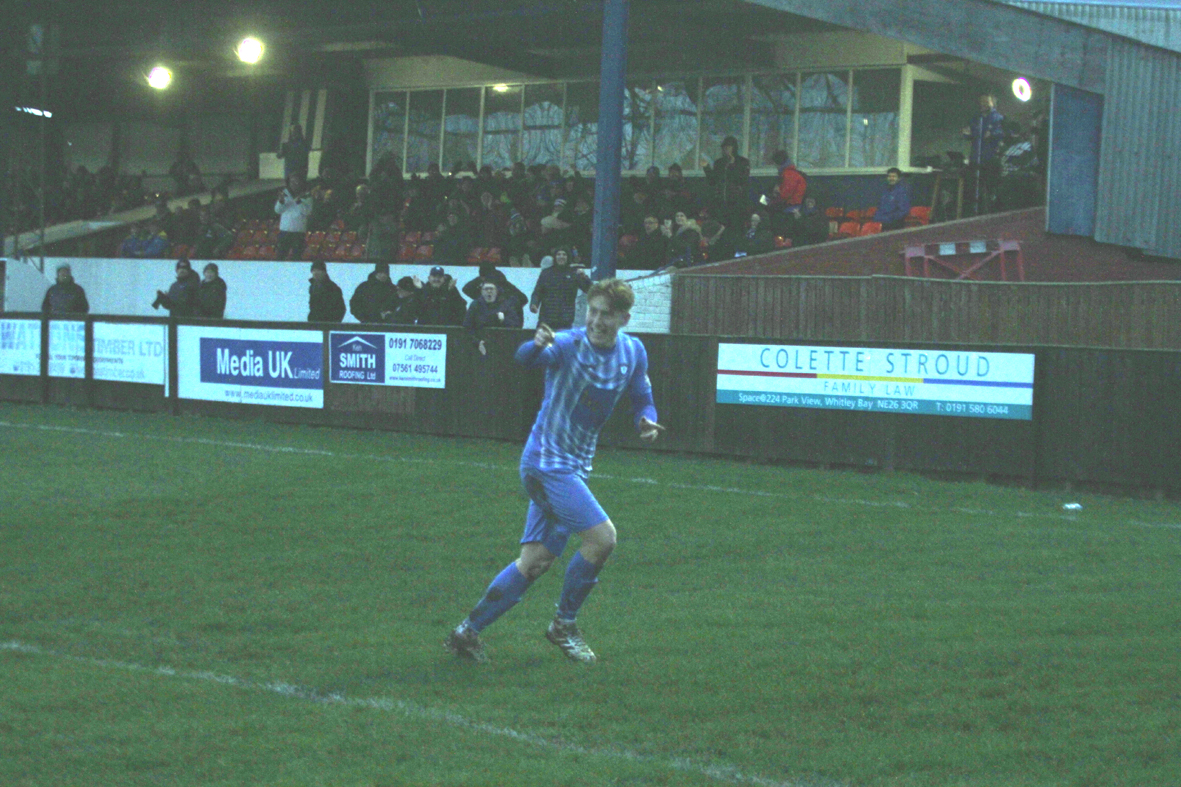 For the second time this season, Whitley suffered the heartache of a penalty shoot out defeat, but unlike last month when they were reinstated into the FA Vase after opponents Prestwich were found to have fielded an ineligible player, there was to be no reprieve on this occasion and their dreams of glory were ended for another season.

Once again they were facing a side from Manchester and on home soil they would have been hoping to make the most of their second chance. Having taken the lead shortly before half time, it was looking good for Whitley, who were still ahead as the game entered stoppage time but visitors West Didsbury & Chorlton scored what was a fortuitous equaliser and went on to win 4-1 on penalties.

It was a dramatic climax to a hard fought and closely contested cup tie which left Whitley players and fans stunned, but the vociferous band of supporters who had made the journey from Manchester celebrated joyously with their heroes after the winning penalty went in.

There were chances at both ends in the opening three minutes, with Lewis Orrell played through on goal only for Didsbury keeper Andrew Jones to make a crucial block. Barely 60 seconds later play switched to the other end and Miller fired wide. In Whitley’s next attack, Bailey Geliher sent a first time effort over the bar following a cross from Elliott Day. A lengthy delay followed when visiting defender Connor Hancock picked up an injury and was unable to continue.

The lively start was not maintained when play resumed with chances limited and the game becoming a midfield battle between two evenly matched sides. Six minutes before the interval Whitley made the crucial breakthrough when Geliher crossed from the right, Day headed the ball back across goal and Cameron Brewis drove a left footed shot past Jones to give Whitley the lead.

Two minutes before the interval, a misjudged back pass just outside the Bay 18 yard box let in the visitors but to Whitley’s relief, the shot from Hampson was palmed onto the top of the bar by Pat Nash with a flag raised for offside. Several strong challenges resulted in the game becoming rather heated but at the half time whistle it was Whitley who held a narrow advantage despite not being at their best.

Within seconds of the restart, Luke Porritt had a gilt edged chance for Whitley when he found himself almost through on goal but quick reactions by the West Didsbury defence denied him.

The visitors began to get on top and backed by their fans who never stopped singing all game, they forced Whitley back on the defensive but apart from making a diving save from Hampson in the 53rd minute, Nash was not really troubled.

Whitley gradually regained the upper hand and shortly before the hour mark, Orrell curled a shot just beyond the far post. Harvey Neary then drove a first time effort wide of the upright but with ten minutes remaining came the best chance of the half when Neary crossed from the right and substitute Josh Gilchrist fired a powerful volley just over the bar.

In the closing stages Didsbury pushed forward but could not break down a resilient Bay defence.

With the game entering stoppage time, Neary played Day’s throw in across to Orrell, who turned inside his man and from the edge of the box his shot towards the bottom corner of the goal was fingertipped onto the post by Jones. It was a key moment in the game as when the ball rebounded back into play, it was swept upfield and moments later when played into the box from the right, Miller swung a foot at the ball and it deflected off Michael Hall, rolled onto the post and then just over the line for the equaliser.

Both sides pushed for a winner in the remaining five minutes of added time. Whitley came closest with a header from Lowery that Jones pushed over the bar.

On to the lottery of penalties and West Didsbury went first and scored. Malcolm Morien, a late substitute slotted his spot kick home for Whitley but from then on it all went wrong for the Bay. The visitors were faultless with their next two while Ben Richardson sent his kick over the bar and Elliott Day’s effort was saved. This left the Manchester side needing just one more to win the tie and they duly did so to claim victory 4-1 and send their fans wild with delight.