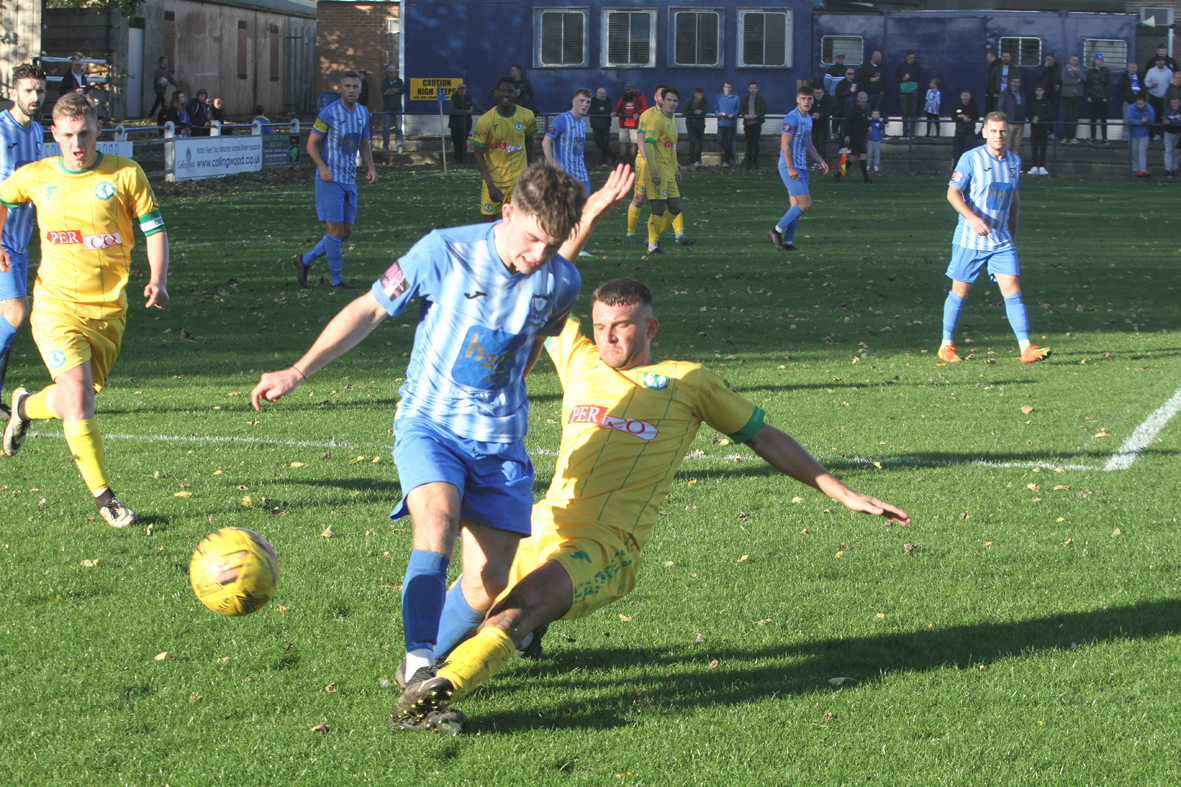 Whitley are through to the next round of the FA Vase but after going two goals up inside the first 20 minutes, they were made to battle all the way by a hard working and spirited Billingham Synthonia side.

Last season the sides met in the First Qualifying Round of this competition also at Hillheads and Synthonia sprung a shock, winning 4-3 but this time there was to be no upset with Whitley progressing to the Second Round for the first time in five years.

There was almost an early goal for Whitley following a fourth minute corner on the right when Richardson played the ball into the path of Stephen Turnbull whose shot clipped the top of the bar.

Whitley were having the better of the early exchanges and in the 15th minute they deservedly took the lead. Malcolm Morien played the ball out to the right where Bailey Geliher raced away then crossed low into the box where Morien applied the finishing touch, slotting home after the visitors failed to clear with the ball. Three minutes later the lead was doubled when Scott Lowery’s throw-in near the right corner flag reached Brewis, who played the ball across the edge of the box. Ben Richardson struck the ball from 20 yards and it took a slight deflection as it flew into the net past Hubery.

Whitley were dominant and a third goal would probably have put the game beyond Synthonia. It almost came when a free kick was played into the box by Brewis but Neary’s shot was too high.

The first real threat from the visitors came after 28 minutes when they won a free kick 20 yards from goal but the ball was fired into the Bay defensive wall and cleared. Whitley spurned a glorious chance five minutes later when Cameron Brewis was through on goal but put his shot narrowly wide with only Hubery to beat. Moments later a shot from Geliher was safely gathered by the Synthonia keeper.

In the final ten minutes of the half, the Teessiders came much more into the game as Whitley seemed to sit back on their lead. Lister made a good low save when a ball was played in from the right after it should have been cut out. Chapman then headed inches over the bar from a free kick played in from the right. Whitley’s passing was becoming rather sloppy and while they retained their two goal lead at the interval, the game was far from won.

That became more apparent within two minutes of the resumption, with substitute Max Craggs getting on the end of a ball into the box from the left, poking it into the far corner of the net. The goal sparked Whitley back into life and within 60 seconds they had restored their two goal advantage. A neat through ball reached Harvey Neary, who burst forward shrugging off several challenges as he raced into the right of the 18 yard box where he squared the ball for Morien to drill it home from close range.

Undeterred, Synthonia kept plugging away and their cause was aided when Richardson was given a temporary dismissal for dissent leaving Whitley a man short for ten minutes.

Lister made two good saves midway through the half, pushing one shot wide before blocking another effort, with the rebound then driven across goal and beyond the far post. With 20 minutes to go, Lister made a great diving save, going full stretch to push a goalbound effort from Lavan round the post.

The visitors were pushing forward at every opportunity and Lister was called upon again to save an effort from defender James Ward. Whitley were struggling to retain possession and with eight minutes of normal time remaining, Synthonia grabbed a second goal after an initial effort struck the post and Lavan slotted the ball home.

Whitley responded almost immediately when Lewis Orrell, who had only come off the bench a few minutes earlier, brought a fine save from Hubery, the keeper pushing his powerful shot onto the bar.

An equaliser for the visitors would have led to the tie being decided on penalties and they threw everyone forward in the final stages. Even keeper Hubery came up for a corner but he sent a header high over the bar. Fully five minutes into stoppage time, a long goal kick from Lister was headed on by Neary just inside the Synthonia half, leaving Josh Gilchrist with a clear run on goal. He took the ball round Hubery before slotting it into an empty net to the delight and relief of team mates and the home fans.

There was no way back now for the gallant Second Division side and seconds later the final whistle was blown.

For neutrals in the crowd of almost 400, it was an exciting and dramatic conclusion. For the home fans it was an anxious and nail biting ending but one when they could eventually celebrate.

The victory made it 15 games unbeaten for Nick Gray’s side, a remarkable run of success, and as the manager later pointed out, the victory highlighted the progress that has been made since the sides met in the competition last season, with a rebuilt squad that includes so many young players.