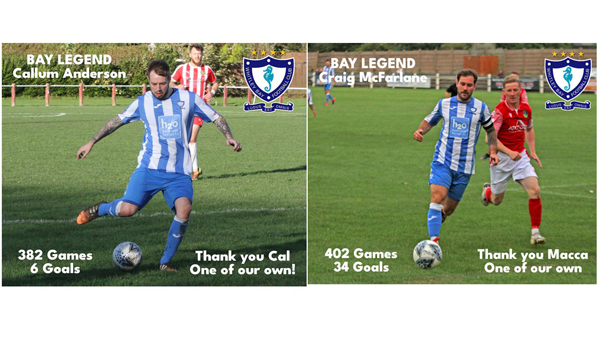 Two of Whitley Bay’s longest serving and most popular players have left the club for pastures new.

Playing in defence and midfield Callum Anderson has spent his entire career to date at Hillheads, coming through from the Reserves in 2008 before breaking into the first team where at just 18 years of age he was a member of the 2009 FA Vase winning squad. He made his Wembley debut the following year when he picked up the first of his two Vase winners’ medals in the 6-1 victory over Wroxham. He then established his place in the side for over a decade. Although hampered at times by injury he went on to make 382 appearances for the Club, putting him in 10th place of all time appearances

“He’s been a great servant to the club, showing tremendous loyalty over more than 13 years at Hillheads” commented Chairman Paul Mcilduff. “I believe he could have gone on to be a professional. He was a superb footballer, making everything look simple, his timing was perfect.”

Callum scored just six goals, his first and perhaps most memorable coming at the Gallowgate end of St James Park to put Whitley ahead in the 2014 League Cup Final. Unfortunately it wasn’t enough to earn him a winners medal as Marske came back to win 2-1 after extra time.

Callum has now moved on and is joining Bedlington Terriers where we wish him the very best of luck.

Craig McFarlane, one of Whitley’s three time Vase winners, joined the club in 2008 for a hugely successful career. After a spell away at Blyth Town and North Shields, he returned to Hillheads to complete a remarkable total of 402 appearances, which leaves him 8th top of the club’s all time appearance charts. A versatile player, Craig spent most of his career as a defender but also scored some important and spectacular goals in his total of 34 in Bay colours. Craig was club captain in recent years but played his last game in December, before taking a break from football. He has now returned to the game where he joins former colleagues Brian Smith and Steve Cuggy, who have taken over as the new management team at Northern Alliance side Newcastle Blue Star.

Paul Mcilduff added “I would like to thank both players for their tremendous contribution to our club over the past 13 years and we all wish them the best of luck in the future.”

Also leaving Hillheads is midfielder Gavin Dick, a regular in the side last season.  Along with Callum, Gavin is also joining Bedlington Terriers. We would like to thank Gavin for his services to the club last season and we wish him well for the future.