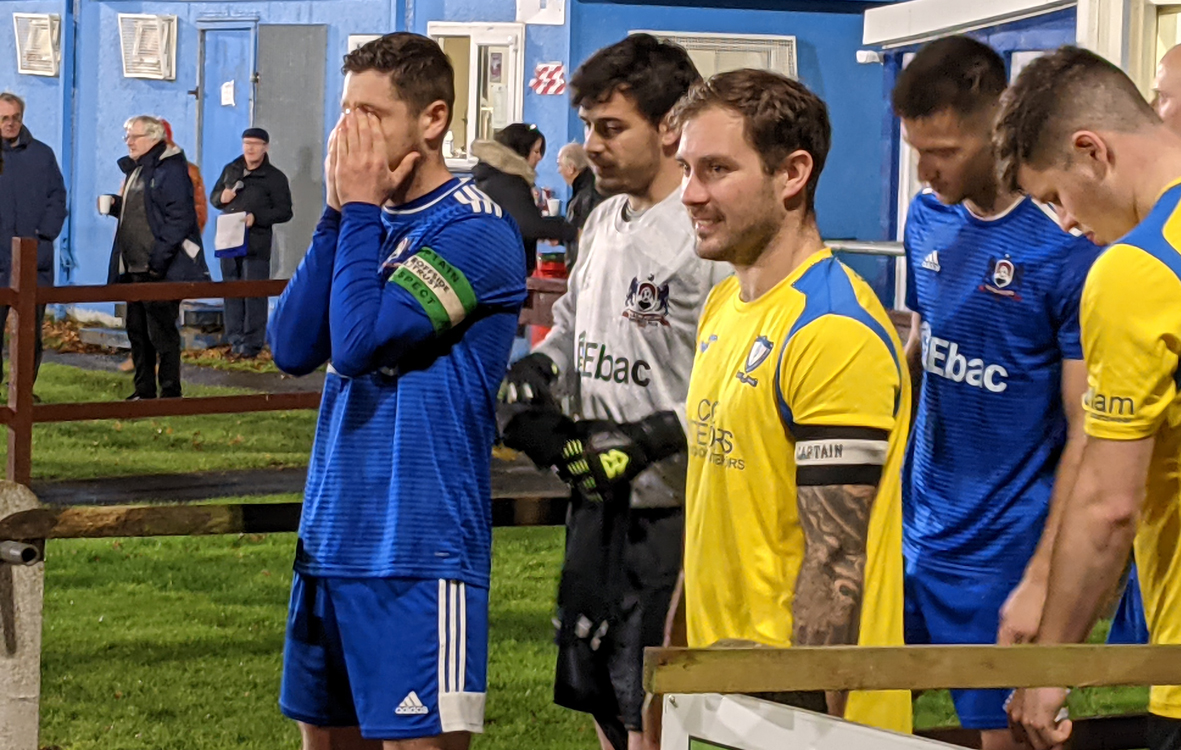 A night that had been billed as a celebratory landmark occasion for Craig McFarlane with the Bay captain making his 400th appearance for the club, turned sour as Whitley crashed to a disastrous defeat at Newton Aycliffe.

Coming into the game on a run of three consecutive victories, they fielded a strong and attacking side, including both in-form strikers Adam Shanks and Malcolm Morien, but a series of inexplicable defensive mistakes left them five goals down just past the half hour with no way back into the game.

Morien had a shot saved inside the third minute but it did not take long for the hosts to take the lead, Ethan Wood slotting home just inside the post with nine minutes played.

Two minutes later Whitley had a great chance to draw level when McFarlane played in Richard Coulson on the right of the box, but he put his shot the wrong side of the post and into the side netting.

That was about as good as it got as in the 16th minute the home side doubled their lead when poor defending allowed former Bay striker Andre Ardelean to make it 2-0 from a narrow angle. Three minutes later it got even worse as Dan Lister was unable to hold a free kick from Dibb-Fuller, just managing to punch the ball away but into the path of Jarvie who had a simple tap in.

Five minutes on, Coulson broke through but his lob over keeper Pickford also cleared the bar.

In the 27th minute, a trip in the box on Dibb-Fuller, involved in all the previous goals, earned Aycliffe a penalty which Pettijean comfortably despatched.

Just past the half hour, the Bay defence opened up alarmingly again and when Jarvie drove the ball into the box it took a deflection off Luke Taylor and flew past Lister for the fifth goal.

In the 38th minute, Shanks volleyed inches over the bar from 15 yards out but as a contest the game was already over and it was now going to be a case of damage limitation for Whitley, who must have been relieved to hear the half time whistle.

Within two minutes of the restart, Shanks had the ball in the Aycliffe net after Coulson’s shot was parried but the goal was ruled out for offside. The game became more even for a while with Whitley’s defence looking more secure but with 20 minutes left, Aycliffe got their sixth goal when the impressive Dibb-Fuller took the ball round Lister before slotting it into the net.

Eight minutes from time, Pickford was forced into action, making a fine save to push wide a shot from Bay substitute Lewis Orrell, but two goals in the last two minutes rubbed further salt into Whitley’s wounds. A ball played across the face of goal rather than being cleared gave Walker an easy goal then with the final kick of the game, Pettijean completed the rout from the penalty spot after another trip in the box.