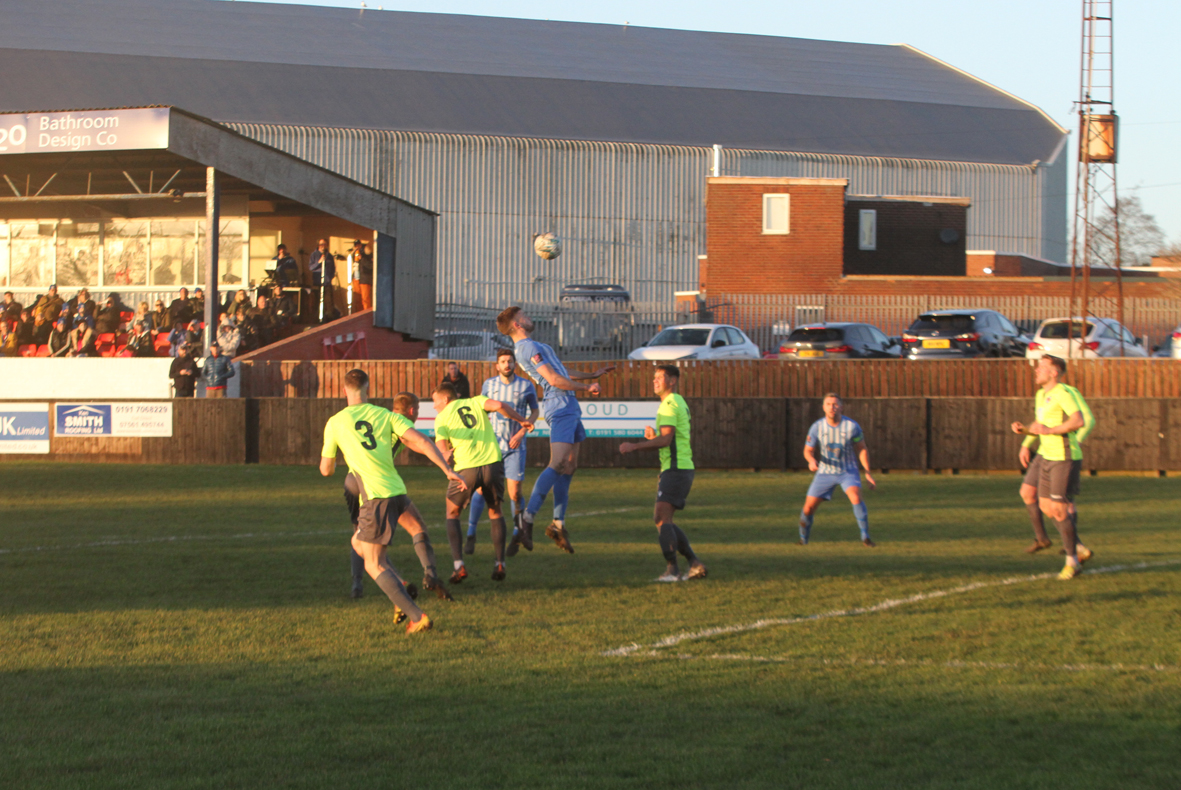 This was certainly not the start to 2023 that Bay fans would have been anticipating, especially after their Boxing Day victory at Ashington. On the day, Carlisle were much the better side in every department and were good value for their comprehensive victory.

This was the first game played at Hillheads for five weeks and while some games in the area were called off due to the recent poor weather, the pitch was soft but perfectly playable.

Before kick off, and in front of Whitley’s biggest league crowd of the season, Lewis Orrell was presented with an award to mark his 100 appearances for the club.

The game got underway in bright sunshine and the visitors started strongly, taking the lead with just nine minutes played. The goal came from a right wing corner when defender Dan Kirkup slotted the ball home just inside the near post. Whitley responded immediately and barely 60 seconds later Luke Porritt had a close range shot blocked. Adam Hutchinson then drove the ball wide of the target from a corner on the Bay left.

Carlisle soon returned to the attack and failure to clear a ball inside the Whitley box gave Tom Mahone the chance to slot home a second goal after 20 minutes. Chances continued to come and after an attempt on goal by Orrell was easily gathered, City wasted a great chance when they broke clear but the ball was struck well wide.

On the half hour, Harvey Neary fired wide when well placed but two minutes later back at the other end, Hutchinson conceded a penalty with a trip on Birdsall just inside the box. However, Dan Lister came to the rescue with a fine save from Jordan Palmer’s spot kick.

A free kick just outside the Carlisle penalty area was headed into the box then put just over his own bar by defender Arron Bradbury but right on half time, the Cumbrians effectively put the game beyond Whitley with the goal of the game, a tremendous shot by Mahone from outside the box that flew in off the far post giving Lister no chance.

Barely three minutes into the second half, City added a fourth goal. The ball was played into the box by Birdsall from wide on the right and Jordan Holt slotted home just inside the near post.

After a low ball from Porritt flew across goal with no one on hand to apply the finishing touch, a good cross from the right by Josh Gilchrist gave Andrei Ardelean a great chance to reduce the arrears but from inside the six yard box he put the ball just the wrong side of the post.

Whitley made their first changes on the hour, Morien and Brewis replacing Ardelean and Orrell. Six minutes later Whitley came their closest yet when keeper Stephen Townsley, who had been rarely troubled, struggled to grasp a header from Gilchrist, just managing to stop the ball from completely crossing the line.

Four minutes on from that chance, Carlisle made it 5-0 when Jay Kelly’s shot was pushed out by Lister but only as far as the ever dangerous Callum Birdsall who turned on the ball before drilling it into the far corner.

Whitley quickly pulled a goal back when Luke Porritt ran at the City defence, played the ball out wide to Morien whose cross into the box was headed back into the goalmouth by Day and Porritt finished from close range. It was a deserved reward for one of the few players in blue and white who emerged from the game with credit. He kept running all game and created two more chances in the closing stages, first with a ball across the face of goal that Townsley collected safely, then a powerful shot that the keeper did well to keep out with his foot.

Between those opportunities, Day might have won a penalty when he appeared to be pushed to the ground inside the box. But while Whitley created a good number of chances in the final half hour, it was too little and much too late as the damage had already been done by a Carlisle side who adapted to the conditions far better.

Football was put in perspective when a bad day on the pitch became an extremely sad one for everyone associated with Whitley Bay Football Club and indeed the wider football community, when news came through that late that evening, club secretary Derek Breakwell had passed away after a long and brave battle with illness.